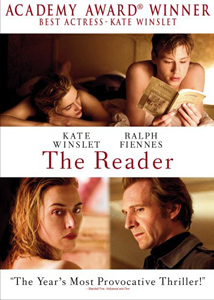 Best Actress winner Kate Winslet stars as a working class woman in post-war Germany who carries out an affair with a teenage boy in The Reader. Years later she is the defendant in a war crime case when her ex-lover (Ralph Fiennes) re-enters her life.

Two of the best actors working, Philip Seymour Hoffman and Meryl Streep go head to head in Doubt, from writer-director John Patrick Shanley’s own Pulitzer-winning play. The tense drama investigates an accusation of child abuse in a parish, playing with perceptions of guilt. Amy Adams and Viola Davis co-star.

Comic book creator Frank Miller gives tribute to a comic book legend by appropriating his work and making it look like his own Sin City in the ho-hum The Spirit. Gabriel Macht, Eva Mendes, Scarlett Johansson and Samuel L. Jackson star.

Yes Man is a high concept comedy vehicle for Jim Carrey, which, like many high concept films, never actually goes beyond the concept. Carrey, an apathetic divorcee decides to turn his life around by saying yes to every opportunity he is given. Zooey Deschanel seems uncomfortable as the love interest. The only one who scores a laugh is “Flight of the Conchords’” Rhys Darby as a Michael Scott-esque boss.

Max Fleischer’s Superman: 1941-1942: Animation pioneers the Fleischer brothers produced these 17 wartime theatrical shorts. It’s a fascinating Technicolor time capsule of the 70-year-old character. Special features include a featurette exploring the background behind bringing the then 3-year-old comic to the screen. Another examines the superhero as mythic figure.

In honor of its 50th anniversary Pillow Talk gets a re-release. The witty sex comedy hints at the coming decade of free love, but is ultimately harmless. The formula of Rock Hudson, Doris Day and Tony Randall would spawn two subsequent films in the same mold. It’s a credit to the writing and chemistry of the leads that the film manages to hold up despite its subject matter and period.

Like Dark City, The Thirteenth Floor got lost in The Matrix’s wake upon its release. But those two alternate techno-reality predecessors to the blockbuster are good films in their own right. Craig Bierko stars as a corporate genius designing a virtual world of 1930s Los Angeles, who becomes the target of a murder investigation. Soon the lines of reality begin to blur as he becomes more deeply entrenched in the virtual world. Vincent D’Onofrio and Gretchen Mol co-star in this stylish neo-noir.

Pride and Prejudice (1995): This five-hour BBC miniseries is perhaps the best of the many Jane Austen adaptations. Jennifer Ehle and Colin Firth star.

Mean Girls: Before “30 Rock” Tina Fey transitioned away from “SNL” with this surprisingly funny crossover hit. See Lindsay Lohan as a rising star rather than a self-destructive joke. Plus, a 26-year-old Rachel McAdams playing a high school girl.

For all of the criticism of Quentin Tarantino’s ripping off other filmmakers, a whole DVD cottage industry has sprung up around promoting those influences.

Shaw Brothers Collection offers four ’70s kung fu tales of revenge and betrayal from the Hong Kong studio whose output served as one of the main inspirations for Kill Bill. Included in this set are: The Heroic Ones, The Battle Wizard, The Duel of the Century and Two Champions of Shaolin.