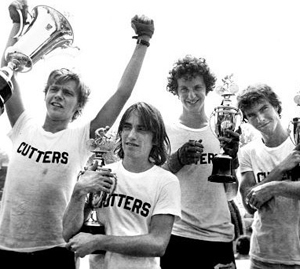 The Breaking Away bike crew

Bike-centric events are becoming so popular in our spread out, smogged up city that to buffer between the Long Beach Bicycle Grand Prix and Pasadena’s Bike Week (May 11-16), the Hammer Museum is presenting Bike Night, a free evening of themed offerings including a free bike valet, vegetarian snacks and an 8:30 p.m. showing of the seminal cycling film Breaking Away.

Organized by featured artist Lisa Anne Auerbach, the night is a complementary program to current Hammer exhibition Nine Lives, which presents over 125 pieces by Los Angeles-area creatives and includes several of Auerbach’s politically charged knits that you have to read to believe (“Knock! Knock!” “Who’s there?” “9/11.” “9/11 who?” “I thought you said you’d never forget.”).

Although it is a grainy, yellow-hued coming-of-age story with more post-pubescent awkwardness than actual bike time, 1979’s Breaking Away’s cult following is undeniable. As a major motion picture (and Academy Award winner) with its plot centered around a non-standard sport, the movie exposed wide-eyed teenagers to the word of Italian cycling and, according to Auerbach, “spawned a hundred thousand bike-people.”

Set in Bloomington, Ind., Breaking Away follows four best friends as they hit the big 2-0 and have no idea what to do with fast-approaching adulthood. Dave (Dennis Christopher) is so obsessed with bicycle road racing and his vintage red Masi that the whole town seems to wonder where his head’s gone. But when the local college sponsors a bike race, Dave enlists friends Mike (Dennis Quaid), Moocher (Jackie Earle Haley) and Cyril (a pre-Wet Bandits Daniel Stern) to help him defeat the jerk-off local college students that have alienated them from the mainstream.

Breaking Away is cheesy yet heartwarming, a perfect film to watch in large groups of bike enthusiasts who might also feel out of place or marginalized by their love of two wheels. Meet up at Heliotrope Drive and Melrose Avenue (Orange 20) at 5 p.m. to ride to Hammer with Auerbach or get on the message boards and start your own.