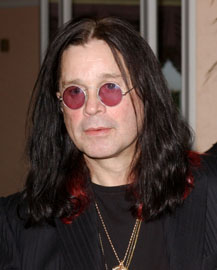 Rock ’n’ roll has provided an important service throughout its relatively brief history: getting hot dates for ugly guys.

Sure, Elvis Presley arrived matinee-idol ready, but Paul was the only truly "cute" Beatle, and Beastie-men such as like Mick Jagger, Jimi Hendrix, the members of Led Zeppelin, Alice Cooper, the members of Kiss (with or without makeup), David Lee Roth and Meat Loaf became studs under rock’s hot spotlight.

So it is that we’ve reached another milestone in rock’s prolonged death march:

"I’ve had a face job and a new nose," Osbourne recently admitted to the London newspaper The Sun. "It boosted my confidence to no end."

Confidence for what? Slurring with authority? Playing Don Juan with Sharon? Doing a Fred MacMurray impression with the kids on your TV show?

Ozzy, embrace this simple truth: You’re no looker. The most indelible image of you is your biting the head off a bat. Most of us didn’t even witness this spectacle, but we can imagine it quite vividly, and it’s not an attractive sight.

And that’s cool. Your music was never pretty, either. It’s not like "War Pigs" and "Suicide Solution" are prom standards.

It’s also no coincidence that as age has rendered you more of a shambles, you’ve become more lovable. A facelift now is like a coat of primer on Stonehenge.

Yet Ozzy is just the caboose on a crazy train of aging rocker makeovers. Aerosmith’s Steven Tyler used to be a poster boy for the whole sexy-ugly rock-star aesthetic.

Did you see him at the Grammys? With his squinchy nose and pulled-up cheeks, He looked like Joan Rivers with a dye job.

Motley Crue frontman Vince Neil had been a symbol of ’80s rock party-hearty excess, but then came a reality-TV spin on "The Surreal Life," and early this year he was shown undergoing plastic surgery and liposuction on the VH1 show "Remaking: Vince Neil." He still resembles Jon Lovitz’s lost twin.

And when reclusive Guns N’ Roses star Axl Rose resurfaced a couple of years ago ... well, here’s how the Awful Plastic Surgery Web site described it: "He looks like a totally different person after a light face-lift, cheekbone implants, and assorted chemical peels that have left his skin rosy pink. Ewww."

Here’s the rub: Not looking presentable has been the rule more than the exception in the rock world. When the Beatles arrived, everyone wore matching suits, but by the end of the ’60s, John Lennon was sporting stringy, unwashed hair, and his contemporaries were flouting their freedom by wearing whatever the heck they wanted.

No one urged liposuction on David Crosby.

Sure, the glam and hair-metal bands were image-conscious to the extreme, but they were a far cry from today’s pretty boys and girls. Someone as talented and homely as Janis Joplin wouldn’t stand a chance today. in an era when almost every celebrated female singer – Alicia Keys, Norah Jones, Beyonce – happens to be a knockout.

The male rock stars – such as John Mayer, Jack Johnson and Dave Matthews – tend to be as blandly handsome and well scrubbed as their music, and R&B counterparts Usher and Kanye West wouldn’t look out of place on a GQ cover.

You can’t compete with that, Ozzy, and you shouldn’t. We want to see you become rock’s version of "The Swan" about as much as we’re holding our breath for John Mayer to apply his gleaming white choppers to a winged rodent.