17 Again: Matthew Perry gets a do-over – as Zac Efron! 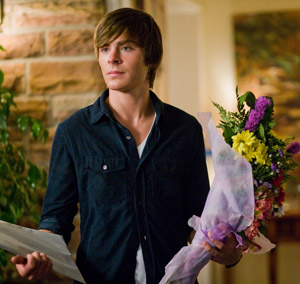 “If I only knew then what I know now.”

From that simple cliché, 17 Again, a film many people are heralding as Zac Efron’s coming out party as a leading man, was born.

The movie is about Mike O’Donnell, a dejected 37-year-old – played with brilliant cantankerousness by Matthew Perry – who’s heading for an early midlife crisis as his world falls apart. His wife kicks him out, he realizes his kids want nothing to do with him and he loses his job; all misery he blames on a split-second decision he made when he was 17.

With a bit of magic, and some suspended audience disbelief, Mike gets transformed into his 17-year-old self, played with tremendous range and ability by Efron, for a chance to right his wrongs. Think of it as an updated hybrid of Big and It’s a Wonderful Life.

Writer Jason Filardi teamed up with producers Adam Shankman and Jennifer Gibgot to create the script after Gibgot decided that Efron was going to be the biggest star of his generation. Gibgot insisted on Shankman casting the High School Musical star in Hairspray, despite Shankman’s initial objections (ones he now regrets and apologizes for), and during the film’s production, they both became aware they were witnessing the inception of something monumental.

“Really how it started was with us realizing that Zac was a star and deserved to be in his own movie,” Gibgot, an admitted Efron fan, explains, “and New Line saying to us, ‘Find us the right project for him, and we would love to make it.’”

From that moment, they began tirelessly searching for the perfect launching pad project. It began with Filardi’s script, which, Shankman says, was “originally a 14-year-old, but Jennifer asked, ‘Can we up the age a little?’”

Within a year from their initial script meetings, they had a completed film, one Filardi reveals he wrote specifically with Efron in mind. That kind of shotgun timeline was due to the growing buzz around Efron’s career, according to Gibgot and Shankman.

“The ‘It Factor’ in him is so high wattage,” Shankman trails off, shaking his head, at a loss for words. “He changes energy in a room.”

“Adam has taken a lot of risk and put me in things he didn’t have to that weren’t, at the time, the obvious choices,” Efron says with great reverence to Shankman. “I pretty much owe Adam everything at this point.”

The risk factors were based on the idea that Efron might only be a Disney darling with an expiration date after his starring roles in the massively successful High School Musical series. But Efron is committed to creating a career path in line with Leonardo DiCaprio despite his Mickey Mouse roots.

“If you’re going to judge him based on the High School Musical films, that’s the material. He can only do so much better than the material,” Shankman says, quickly jumping to Efron’s defense.

“That was the exciting thing about this movie and this character,” Efron, who relished the chance to get away from his Disney-fication, grins. “When I read the script, there were a million different things to play. That kind of complicated character had a lot of opportunities.”

“He’s fearless,” Gibgot praises. “He’s not one of those people who’s worried about, ‘Do I look stupid right now?’”

“He definitely does not care about looking ‘cool,’” Shankman agrees.

“I like to do my best,” Efron shrugs, almost sheepishly. “I wouldn’t be proud of it if I didn’t give one hundred percent.”