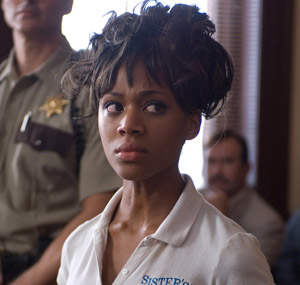 Hollywood churns out a huge amount of flicks based on actual events each year, but once in while audiences are treated to a gem, and American Violet is a prime example.

Based on true events in the midst of the 2000 election, this penetrating drama centers on Dee Roberts (Nicole Beharie), a 24-year-old mother of four who’s forced to take on a corrupt district attorney (Michael O’Keefe) when she’s unjustly prosecuted in a large-scale drug case.

Whilst working her shift as a waitress in a diner in a small Texan town, Roberts is dragged from work in handcuffs and charged as a drug dealer after her Arlington Springs housing project is raided by police. With no prior drug record and no evidence of drugs in any subsequent searches, she is offered a plea bargain and a hellish choice – either guilty to a crime she didn’t commit and leave jail as a convicted felon, or go to trial with the prospect of a 25-year sentence if found guilty. With her freedom and the custody of her children at stake, Roberts chooses to fight the district attorney and the criminal justice system he represents, risking everything in a battle that changes her life and the Texas justice system.

An extraordinary tale of personal courage, Beharie as Roberts does such a remarkable job of trying to be strong that she tugs at the heartstrings and is perfect for the role. With a wonderfully expressive face and performance as a striving single mother of four young girls, she excellently conveys the gradual erosion of a woman’s self-worth and infuses a standard plot with extraordinary emotional conviction.

Although some scenes can feel depressingly schematic and exhausting, audiences will cry, squirm and root for Roberts as she experiences a roller coaster of pitfalls and barriers. With impassioned performances, American Violet is a good and powerful flick, which aptly highlights the flaws of America’s judicial system.