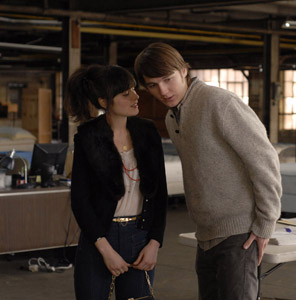 In a very short amount of time, Paul Dano has become one of the premier actors of his generation. His storied film career began with the critically acclaimed indie hit, L.I.E. He has gone on to roles in Little Miss Sunshine, There Will Be Blood and now stands to win over audiences with his latest impressive performance.

Bryan is the unwitting black sheep in his family of overachieving males. His father (Ed Asner) is an accomplished man in his 80s. And his two older brothers are a surgeon and an oil tycoon, respectively. Yet for all the ambition within the family’s gene pool, Bryan aspires to do nothing more than adopt a baby from China and fulfill what is probably his destiny: selling bedding to rich assholes.

One day while at work, a wealthy loudmouth art collector (played beautifully by John Goodman) comes into the mattress shop to make a purchase. He later sends his daughter, Harriet (Zooey Deschanel), to finalize his purchase. In her brief exchange with Bryan, it becomes evident that these two quirky and quiet kids are going to end up in a love affair for the ages.

Gigantic is outstanding. There, I said it. It’s Punch-Drunk Love for a new generation.

Dano, whose sex appeal and good looks don’t bear the obviousness of a contemporary like James Franco or Emile Hirsch, is still perfectly cast and believable as a guy who a fickle rich girl would fall for. As Harriet and Bryan’s relationship teeters back and forth, the audience is left wondering what her problem is.

Deschanel is amazing as well. She could be the great Debra Winger 25 years ago and is giving other actresses her age a reason to go back to school and brush up on their skills.

Sure, the pacing of the movie is slow, and there are no major bells and whistles to it, but the story still leaves true romantics with lots of nice warm fuzzies. Even alt-comedian Zach Galifianakis’ role as a seemingly psychotic homeless guy stalking Bryan’s peaceful, ordinary life is a thrilling allegory that adds some nice meat to the story.

Director Matt Aselton has said that he has an affinity for movies that blur the line between absurdity and reality. He’s managed to incorporate both into Gigantic flawlessly.