A Win still Eludes the Team 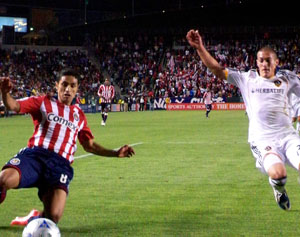 Making his MLS debut, goalkeeper Donovan Ricketts collected his first career shutout with the Galaxy, who are now 0-1-2. They currently sit in sixth place in the Western Conference standings with two points.

Three red cards were issued throughout the match, and the prominent one came in the 45th minute when Chivas USA midfielder Paulo Nagamura dangerously tackled striker Landon Donovan. The Galaxy’s Alan Gordon and Gregg Berhalter received red cards as well.

It proved to be a physical and intense match from the start, as it always has been in the SuperClasico at the Home Depot Center. Nonetheless, Chivas USA was the most active of the two SoCal teams.

The Galaxy are still in search of their first win this season. They will now embark on a two-match road trip, starting against the Earthquakes in San Jose Saturday at 7:30 p.m.