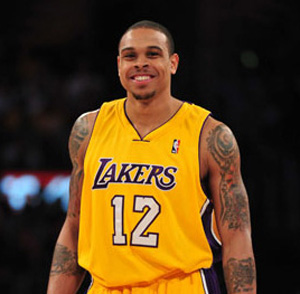 The 64-17 LAKERS, who have sat at the top of the Western Conference all season, brought their regular schedule to a close last night at Staples against one of the teams they could face in the first round of the playoffs, the 47-33 Utah Jazz. At this point, Utah is in a tight race for seventh place with 48-32 Dallas (The Mavericks’ last game is tonight at home against 52-28 Houston).

Regardless of which team ends up as the west’s eighth seed, the Lakers should take the series within five games. The squad would then face either Portland (52-28) or Houston (52-28) in the conference semifinals.

The Lakers are prepared to go all the way to the finals again this year, and several factors point in their favor. The playoff experience of Kobe Bryant and Derek Fisher is definitely a force to be reckoned with, as is the strong, consistent play of Pau Gasol.

With the return of center Andrew Bynum to the starting lineup, Lamar Odom has shined coming off the bench in the past few games. Shannon Brown has proven to be a great asset to the Bench Mob as well.

Although they have proven to be a stronger defensive unit, the Lakers still struggle to maintain consistency on that end. Despite the anticipation of a Lakers/Cavaliers match-up in the finals, it’s a long road and anything can happen.

PLAYER OF THE WEEK: SHANNON BROWN

Since being acquired from the Bobcats in February, the second-year shooting guard has brought fresh energy off the bench. This week he’s averaged six points in 17 minutes – a good start to what will hopefully be a stellar career with the Lakers.