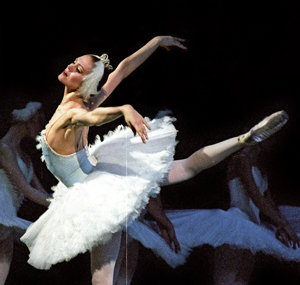 The documentary Ballerina takes as its subject matter the lives of five prima ballerinas who dance with the world famous Mariinsky Theatre. The company, formerly known as the Kirov, has been renowned as one of the premiere ballet companies of the 20th century. (With the fall of the Soviet Union, the company went back to its original name, Mariinsky.)

What is so fascinating about this film is how it gives a glimpse into the everyday lives of these dancers, even as it juxtaposes images from their stage personas. The perfection of ballet technique is so staggering that they can seem otherworldly, and yet in street clothes without makeup, talking directly to the camera, they seem like perfectly normal girls.

‘Normal’ is the wrong word. For each one of the five dancers is endowed with remarkable ambition. They also happen to be gorgeous. Everything from how they hold themselves to simply walking down the street exudes dancer. But it is onstage, done up in their costumes and pointe shoes that they appear like angelic figures.

Director Bertrand Norman does a great job of showing the culture around Russian ballet. The film’s narrator says that all Russian girls at one point or another dream of being a prima ballerina. This point is driven home with amazing footage of very young girls doing rigorous ballet technique.

Just why it is that the Russians have adopted ballet as their national art form and have taken it too such extraordinary levels is not to be perfectly explained. But what is certain is that dance lovers the world over owe the Russians an enormous debt of gratitude for preserving and maintaining this beautiful art. In like manner, Ballerina pays proper homage.