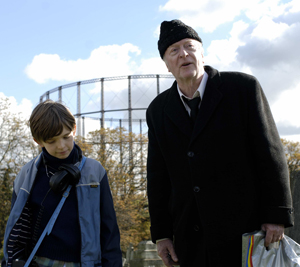 Bill Milner and Michael Caine in Is Anybody There?
(Credit: Nick Wall, courtesy of Story Island Entertainment)

I think it was Leonardo da Vinci who once said that instead of learning how to live, we all are learning how to die. I’ve thought extensively about the Mysteries of Life and reached one conclusion: Death only gets scarier the more you think about it.

Psychics and paranormal experts believe they can tap fountains of information from the depths of the unknown. But the truth is we all can, because there is nothing more paranormal than reality. And the fact that one day we will cross the veiled threshold and join da Vinci begs the excruciatingly obvious question: Will anybody be there to greet us?

Bill Milner, who starred last year in the charming indie flick Son of Rambow, is Edward, an inquisitive adolescent living in the ultimate metaphor for death: an old folks’ home.

It’s the 1980s, and his incapable, cantankerous parents (Anne-Marie Duff, David Morrissey) have transformed their quiet English life into death’s morbid waiting room. The senile occupants are charming elderly men and women. Bob is a shell-shocked World War I veteran; Ena is a kindly kleptomaniac; Elsie is a once-prominent dancer who now has a prosthetic leg; Reg is an aging philanderer.

Left to his own devices at home and teased by his classmates at school, Edward finds solace by trying to prove the presence of ghosts with his tape recorder. His lonely and unhealthy existence is rudely interrupted by the latest arrival to the retirement home. Clarence (Michael Caine) is a grieving widower and an ex-magician who nearly runs over cars and pedestrians alike in his beaten and battered magic bus.

Edward and Clarence form an unlikely friendship. Clarence helps Edward come to terms with the prospect of death, and Edward stands by Clarence despite his failing health. Not to give away the ending, both Edward and Clarence learn to forgive the past, accept the present and ignore the looming arrival of the reaper.

Is Anybody There? seeks not to provide a comprehensive response to the possibility of an afterlife, but instead lightens the sinister emphasis society places on dying. Milner and Caine have an elastic, heartwarming chemistry that radiates charm from every fiber of their unorthodox friendship.

The performances by Duff and Morrissey are noteworthy, but Milner steals the screen with his simple and earnest portrayal of a boy confined by his obsession with non-existence.

This film is not an existentialist view of life or death; it doesn’t preach the insignificance of human beings. Rather, it stresses the importance of leading a precarious, sanguine, rewarding, unadulterated, completely fulfilled life.

Is Anybody There? releases in select theaters April 17.