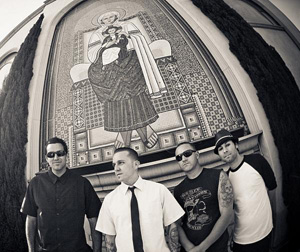 Los Angeles’ South Bay beach communities have long been known for spawning great punk bands like Black Flag, the Circle Jerks, the Descendents and Pennywise. Now following in those legendary footprints are the Darlings, a no-holds-barred quartet whose members hail from Redondo Beach and Hermosa Beach.

Band members are singer/guitarist Buddy Darling, guitarist Josh Kearney, bassist Kris Kranes and drummer Josh Fasen. The band first gained notoriety when they won a local Battle of the Bands in 2006; a victory that helped land them a spot on last year’s Warped Tour.

Now the Darlings have released their debut recording, a self-titled EP containing music that comes with the instruction to “turn it up and get out of the way.”

Buddy Darling is equally succinct in discussing the future of the group: “We’re going to be around simply because we love it! So check us out.”

Legendary rockers Kiss have teamed with social media company Eventful to give fans a chance to determine where the band will play on the fall leg of their 2009 tour. The tour begins in September, and according to a statement on the Kiss Web site, the band will play wherever the popular vote demands.

Singer and bass player Gene Simmons says, “Kiss has never followed the rules; we have always broken them. Kiss has never listened to critics; we have only listened to the fans. It’s time to give back to the fans with bigger shows and longer set lists. And for the first time anywhere, we want our fans to tell us where they want us, and when.”

Fans can cast their votes at kissonline.com. Kiss is currently touring South America and working on their first new studio album in 11 years.

Comerica Park, the home of baseball’s Detroit Tigers, has been renamed Kid Rock Field. Rock recently purchased the naming rights to the stadium from Comerica Bank for an unspecified amount.

Says Kid Rock, “This has been a dream of mine for a long time, and with the banks in trouble, it seemed like the right time for me to reach out to the fine people at Comerica Bank. Since they relocated to Dallas after opening the stadium they were very open to the idea of making this deal. I’ve never been more excited, and I’m proud to be able to add my name to the legacy of my favorite baseball team.”

And just so fans attending games don’t go thirsty, Rock has entered into a separate agreement with the Michigan Brewing Company to produce a line of Kid Rock beers that will become the Tigers’ official suds.

System of a Down frontman Serj Tankian wants President Obama to officially recognize the Armenian Genocide. The Armenian Genocide took place in 1915 shortly after the beginning of World War I when the government of Turkey decided to purge their nation of the Armenian minority, resulting in the death of more than a million people.

Turkey has long denied the atrocity, but the rest of the world is demanding that the nation take responsibility for their actions, and President Obama has pledged to give the Armenian Genocide official recognition. Tankian is working with guitarist Tom Morello (Audioslave) and the Axis of Justice to nudge Obama into keeping his pledge and to honor the April 24 commemoration of the genocide on the Global Day of Remembrance.

Tankian is of Armenian heritage, and his grandparents survived the ethnic cleansing. For more information, visit axisofjustice.org.