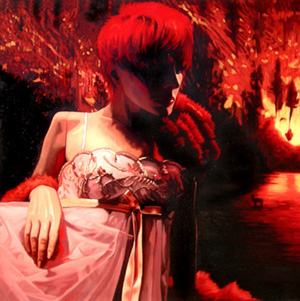 Culver City may be the epicenter of the artistic renaissance in Los Angeles. Drive down Pico Boulevard and you’ll find intermittent bedrocks of galleries, design centers, architecture firms and art studios. Evan and Freddi Cerasoli joined this aesthetic exodus to Culver City, moving their titular studio – the Cerasoli Gallery – from Santa Monica.

While the gallery has moved, the mission remains the same: “to represent and exhibit, up-and-coming and mid-career local and international artists whose common thread is creative, thoughtful and imaginative contemporary art of their generation.”

For the (re)inaugural show, Cerasoli exhibited David O’Brien’s Explosions in a Mental Sky and Tofer Chin’s Double Dip. Both work with subjectively geometric forms but transmogrify them beyond their common use in minimalist art.

O’Brien, who trained with architect Frank Gehry (Disney Concert Hall), creates crystalline forms that hold rainbows rather than cast them.

Chin says he explores “a world of electronic psycho sexual energy,” which I suppose is the use of apparent CGI figures on chessboards – an LSD trip after watching that early CGI cartoon with modulating shapes and the scene from The Lawnmower Man that played in mall stores that also sold Magic Eye drawings. If there were a world beyond our mirrors, breaking the glass would unleash Chin’s paintings.

Grande and Potter are an obvious match, both rendering photographs-from-a-distance that turn out to be painted when you walk closer. Klotz takes a more abstract approach, turning snapshots – of, say, a football team – into Monet droplets of color.