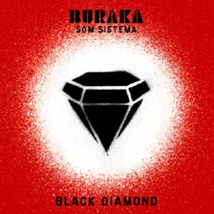 Portugal’s Buraka Som Sistema play electronica-heavy house music that’s also influenced by the kuduro dance sound native to the African nation (and former Portuguese colony) of Angola. What does that actually translate to for the casual listener of Black Diamond? Every song eventually gets around to rocking the dance floor Euro-style even though every song also features lots of electronic doctoring.

“IC19” deconstructs a hip-hop groove into disjointed vocals and odd effects before segueing into throbbing house. Most of the tunes sound like what you would expect from a remix effort, and some, like the multi-lingual chanting of “Sound of Kuduro,” sound spectacularly fresh.

The world beat influences on Black Diamond are often subtle, as demonstrated with the vaguely Brazilian air of “Aqui Para Voces.” Other times the source of inspiration is clear; the intro to “General” is obviously African and done in a style that recalls the work of Ladysmith Black Mambazo.