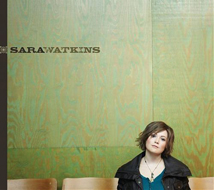 Many people cringed when they first heard about the pairing of country sweetie Alison Krauss and Led Zeppelin singer Robert Plant. The doubters were proven wrong as their project, Raising Sand, became a critically acclaimed bestseller. Does a similar fate await Sara Watkins?

Watkins also teams with a former member of Led Zeppelin; bassist John Paul Jones produces this set of very introspective numbers. Jones does an excellent job of showcasing Watkins’ voice, particularly on songs where she needs to show fragility like with the finally-letting-go sentiment of “All This Time.”

Watkins spent a couple of decades honing her skills with (the now on indefinite hiatus, bluegrass-influenced) Nickel Creek, and she is currently only 27, so it is safe to say that this album also welcomes her to womanhood; you can hear the new-found maturity in her voice and in her phrasing. It helps that Watkins has chosen a set of solid covers to augment her self-penned tracks; takes on Jimmie Rodgers’ “Any Old Time” and John Hartford’s “Long Hot Summer Days” are among the best.