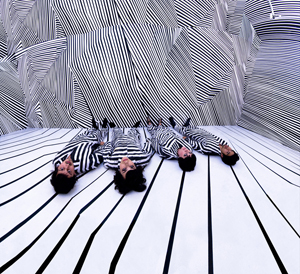 The buzz from the electroclash movement came and went, but it left something spectacular in its wake: Ladytron. The group was founded in 1999 when Daniel Hunt linked up with fellow DJ Reuben Wu. From there, Helen Marnie and Mira Aroyo followed suit, and the rest, as they say, is history. To listen to each of this electronic outfit’s releases is to be dazzled by a unique sonic tapestry of hot beats and rocking instrumentation that melds the best of music’s past accomplishments and future promise.

Ladytron is back on the scene with the single, “Tomorrow” from its 2008 release Velocifero. According to Hunt, this effort is a natural progression of the band’s sound.

“Everything we’ve done is like a continuation,” he says. “At no point have we sought to reinvent.”

He adds, “Next record may be more of an experiment, but this one was more of things we did from previous albums, taken to the next level.”

That next level is also ripe with collaborations with some outstanding artists. Ladytron has made a name for itself, remixing tracks for other musicians such as She Wants Revenge, Placebo and Nine Inch Nails, but has also added an unlikely union to the mix with the addition of Christina Aguilera to the roster.

For most music fans, this pairing is about as “out there” as Jack White partnering with Alicia Keys for the last 007 soundtrack. But Hunt admits that in the case of Ladytron, it’s totally about mutual admiration.

“Normally, it’s just artists that get in touch. Or maybe you just do remix swaps,” he says.

Shortly after leaving Los Angeles, Hunt and company will head out on a co-headlining tour across North America with the Faint. Ladytron is also slotted for European road dates with the masters of electronica, Depeche Mode.

They’ll play shows in Belgrade and Budapest – which are two cities that Ladytron is looking forward to visiting. However, don’t bank on the band losing its senses in a starstruck frenzy when in the company of Dave Gahan or Martin Gore.

“In a way, it’s not like any of us were big Depeche Mode heads,” says Hunt. “When I was growing up, Violator was a big album for me, but I don’t think it necessarily influenced any of us.”

He does look forward to watching the legends in action, though, adding, “We’re excited about it.”

As for the tour with the Faint, fans may feel that they’ve died and gone to music heaven, but this pairing was years in the making.

“When we first started, we had a lot of people suggesting we play together,” admits Hunt.

So the two bands joined each other by performing in concert at the Palladium. Hunt is happy to have the chance to give added value to loyal followers at a time when a lot of music-lovers can’t pony up the big bucks for tickets.

“It just made sense, especially now with the economy and everything.”

In the midst of all the financial hardship and prolonged road life, Ladytron does have one major item that it’s looking forward to with plenty of excitement.

“This summer’s going to be the 10th anniversary of us getting together,” admits Hunt.

However, don’t expect him to give you a prediction on what the next decade holds for his future or even that of his band mates; to Hunt, there’s more beauty in the unknown.

“We’ve never looked more than a year in advance, so I don’t really see anything,” he confesses.

Ladytron will perform April 25 at the Grove, Anaheim and April 26 & 27 at Henry Fonda Theater, Hollywood. For more information, visit ladytron.nettwerk.com.