The Secret Handshake: Are you in on it? 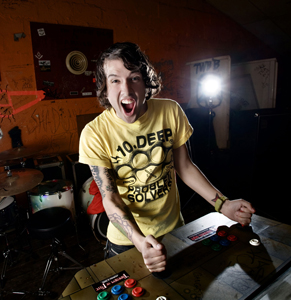 For years, Dallas, Texas was synonymous with anything but cool youth movements. This Southwestern city became internationally famous for big hair, 10-gallon hats and a philandering oil baron named J.R.

Luckily, a new breed of musicians and artists has infiltrated the ranks of this land and turned it into the next big thing for music. Luis Dubuc of the Secret Handshake has played a huge role in this transition.

He first achieved notoriety as part of the hardcore act, Thirty Called Arson. From there, Dubuc put out his first full-length album, Antarctica. Within the next year, he followed that up with the EP This Is Bigger Than You and I, which was distributed by Dollhouse Recordings.

Despite this succession of achievements, everyone’s got his or her origins. For Dubuc, his early days of musical fascination had incredibly humble beginnings.

“I just started at the school talent show and went from there,” he says.

Now, this musical maestro returns, stronger than ever. The Secret Handshake’s latest release, My Name Up in Lights, is a project very near and dear to Dubuc’s heart.

“The new record just sort of happened after I got engaged,” says the performer.

Looking toward the future certainly helped stoke the fires of creativity. That inspiration has led to much experimentation with style and even instrumentation. On previous efforts, he’s married the technology of his laptop with all kinds of sounds, including a Wurlitzer, of all things.

“I don’t really have any boundaries to what I do,” he says.

This philosophy enables him to freely build his beats and add whatever accompaniment he thinks will sound good, afterwards. Although often categorized as an electronic act, the man behind the Secret Handshake views what he does through very different eyes.

“I’ve never really felt I was electronic, really,” he says. “I really just consider myself a pop band.”

What also may surprise many people about Dubuc and his music are his influences.

“I totally like urban music, really,” he confesses, listing Kanye West and John Legend among his favorites. Someday, he’d even love to tour with his idols.

But those aren’t the only collaborations he’s put any thought to. Dubuc is extremely interested in seeing the fruits of his hard labor appear on the silver screen.

For him, there’s also one name that leaps out as the best filmmaker with whom to partner his songs.

“Michel Gondry,” he proclaims, adding that he would love his song to appear, “in a really happy part of [Gondry’s] movie.”

As for the next step in his exciting story, Dubuc stares out onto a promising horizon that includes his pending nuptials in June, as well as “getting ready to go on tour in May.”

“I’ve been overseas three times last year. I think the kids are really fun,” he admits.

Still, don’t expect this star in the making to abandon Texas. Despite the perception that it’s not the hotbed of cool, Dubuc would have you guess otherwise. After all, he understands the personal hand he’s had in the city’s current metamorphosis as the nation’s creative hotspot.

“Everyone’s just trying to do what I do,” he explains of the Southwest’s burgeoning electropop scene.

But make no mistake; he’s not deterred by this. Instead, Dubuc is flattered by the similarities. His laid back joy about the work he does and the ensuing popularity that’s sure to follow takes a backseat to good old-fashioned Texas charm.

My Name Up in Lights is currently available. For more information, visit thesecrethandshake.net.