Requiem for A Gilmore Girl: The Lack of Quality TV for Women 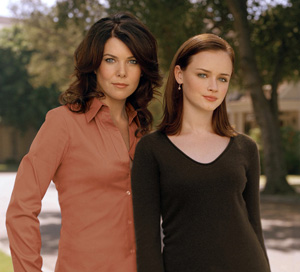 Gone are the Monday morning chats my friends and I would have about the exploits of Carrie, Samantha, Miranda and Charlotte. No longer are there weekly popcorn and wine fueled viewing parties of “Gilmore Girls.”

It’s been five years since the “Sex and the City” vixens went off the air and almost two years since Lorelai and Rory bid adieu to TV audiences, and the absence of both programs is still sorely felt.

The brutally honest conversations between the fabulous foursome about sex, fashion and friendship and the Gilmores’ witty banter about all things pop culture either reminded you of people you already knew or made you want to be friends with them. All of the characters on these shows were honest portrayals of real people.

DVDs of both shows are still top sellers, and the success of the Sex and the City movie shows that women are still hungry for more (A sequel is currently in development for 2010.). The CW has tried to compensate for the loss of “Gilmore Girls” with goody-goody schlep like “Privileged” (A second season for the show is still up in the air.). While “Lipstick Jungle,” based on another book from “Sex and the City” author Candace Bushnell, and “Cashmere Mafia,” produced by “Sex and the City” creator Darren Star, were both cancelled.

HBO’s “Big Love” and ABC’s “Desperate Housewives” have their moments, but their storylines just aren’t quite relatable to young women. Same with the two sitcoms ABC has currently replaced “Ugly Betty” with, “In the Motherhood” and “Samantha Who?” Thankfully, “Betty” will be back April 30 – even though it’s lost some of edge, at least the fashion is still (somewhat) fierce.

For all of you witch/“Charmed” fans, it’s reported that Rebecca Romijn has been cast as the lead in ABC’s upcoming “Eastwick” series – along with Lindsay Price (“Lipstick Jungle”) and Jaime Ray Newman (“General Hospital”) – an adaptation of John Updike’s The Witches of Eastwick and its 1987 film version.

I guess there are still a few bright spots out there, but nothing yet has even come close to the “Sex and the City” ladies or the two Gilmores.