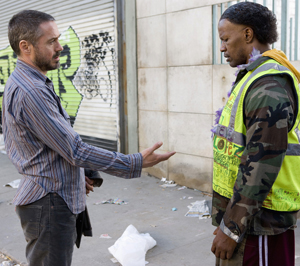 It’s a rare thing to take an afternoon drive through Los Angeles, even a short distance, without being greeted by dirty faces, haggard clothing and roadside signs asking for money. Some of us toss a five out the window in their general direction; most of us cast an ironclad blind eye.

Insulated in our shiny cars, the street might as well be relocated to the opposite side of the moon. We have no sympathy for the uneducated, deceitful, lazy vagabonds who claim residence on the worn pavements that, naturally, belong to us – not them.

Or so the story used to go. The Soloist is a feature film adaptation of the novel by Steve Lopez that seeks to change our minds.

“You know we’re all half-way crazy sometimes,” jokes Foxx with an edge of complete seriousness. “We go places in our mind, and that’s the reason we are who we are. Doing this, it was tough. As the psychiatrist said, it’s like taking your brain with schizophrenia, putting it in a meat grinder and then having to think. It’s a very horrid place to be.”

As Lopez begins to research his new friend, Ayers’ past unravels like spaghetti on a fork: He was a cello prodigy who attended Juilliard for two years before his mental instability forced him to replace his warm home with the dangerous tunnels of downtown Los Angeles. Lopez takes Ayers to the Lamp Community where hundreds of others, who are also homeless and incapable of caring for themselves, congregate.

Director Joe Wright made this film on the one condition that he was allowed to use actual homeless civilians rather than paid actors so as not to detract from the story’s veracity.

“At Lamp I met extraordinary people,” says Wright with the utmost sincerity. “I felt quite at home there, certainly more at home than I do in Beverly Hills where the real monsters live. We made the film with them, rather than just about them. They were the most wonderful thing about making the film. We had a really good time together.”

It becomes the quixotic mission of the writer to get the tragically brilliant artist off the streets and back to performing. The film’s constant allusion to music juxtaposed against the nitty-gritty, naturalistic truth inherent in L.A. culture forced the actors to approach the project with an authenticity and vulnerability that shines true in each scene.

“Making connections, that’s what people do,” admits Downey Jr. very matter-of-factly. “It’s a predictably rational way of seeing people to soothe yourself so that you are OK in your own skin.”

The most touching part about this highly stylized piece of cinema is its message. Sure, the film is a vessel for Downey and Foxx to display their acting chops. But more than anything, it is a testament to the bonds of human interconnectivity in the face of failure, decay and a judgmental world.

“What I’ve learned is that by humanizing Mr. Ayers, we may have taken the step in humanizing thousands like him and destigmatizing mental illness,” says the real-life Lopez who remains close friends with Ayers. “You can do it with a compelling human drama and tuck all of that in neatly so that you don’t even see it. It’s just a spoonful of sugar to help the medicine go down.”

The Soloist releases in theaters April 24.