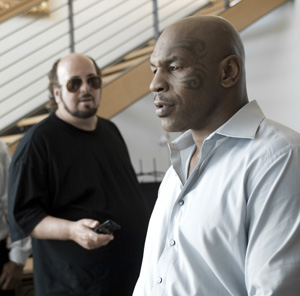 It was 1985. Director James Toback was on the set of The Pick Up Artist when he met a bulky yet athletic young man. Only a few people knew of this 19-year-old, primarily boxing aficionados. One year later, this kid became the youngest heavyweight champion ever.

Almost 24 years later, Mike Tyson finds himself on the big screen as the subject of a Toback documentary.

“The idea of the movie was to create kind of a self-portrait, to be transmitted through the prism of the aesthetic sensibility of yours truly,” Toback explains of his vision of Tyson. “What I wanted was to get his views of everything in his own words.”

In his five days of shooting the film (and ensuing 12 months of editing), Toback set out to share with the public a panoramic view of Tyson’s life. Directing only his second documentary, Toback wanted the moviegoer to feel the true impact of Tyson’s rollercoaster life – the hardships as a child, the early success in the ring, the criminal accusations, the time served in jail, the re-claim to fame and the repetition of his demise.

To achieve that end, the moviegoer witnesses Tyson’s many triumphs during the early stages of the film, only to end with the boxer losing fight after fight, showing all but one of his losses in succession.

“We needed to make that horrible ending felt,” Toback says emphatically. “I thought it was important to have the brutality and the humility of those last fights and have it register [with the moviegoer] to see the beatings he took after being so dominant and confident.”

In portraying the rise and fall, then re-rise and second fall of Tyson, the acclaimed independent director of Black and White used a variety of original interviews, archival footage and telling photos to shed some light on the life and times of the controversial boxer. Combined with the voice of Tyson himself, the moviegoers delve deep into his life, learning of his childhood struggles in Brooklyn, his rapid rise to fame and his ultimate journey from boxing ring to a solitary cell to the wrong side of media attention.

“Basically, it’s a tragic structure of a tragic figure – someone who starts with nothing, elevates himself to unimaginable heights, then brings himself down by his own behavior and own flaws,” Toback says of the film’s overarching theme. “In the case of Mike, it’s a double Greek tragedy, because he did it again – he got back up and again brought himself down, all through the tragic Greek vice of hubris. [He had] overweening pride and a sense he could do anything and handle anything and most of all get away with anything.”

It was a tragedy Toback has been itching to tell for quite some time, adding he really wanted to focus on the sometimes outrageous demands of the public at large.

“For years I have been looking for a project that would allow for a new form of presentation. I wanted to make a movie that would serve the thematic complexity and multiple layers of character and behavior by splitting the screen and overlapping sources of dialogue and music,” Toback says. “A full portrait film with Mike Tyson as its subject not only allowed for the exercise of that technique but actually demanded it.”