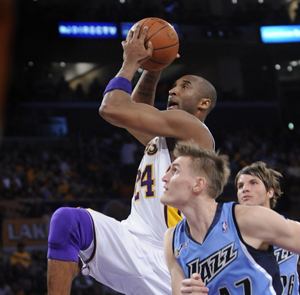 The No. 1 seed in the west LAKERS sailed past the eighth-seeded Jazz 100-113 at Staples Sunday. Several of the L.A. squad’s younger talents thrived in the spotlight, specifically forward Trevor Ariza and guard Shannon Brown.

Ariza tallied a career playoff-high 21 points, including three three-pointers, as well as four rebounds and two assists. Brown came off the bench early in the first quarter with two threes to give the team a strong boost of energy (He ended up 3-3 from downtown.).

Kobe Bryant scored 24, increasing his total career postseason points to 3,710 (He’s now third on the Lakers’ list and ninth on the NBA’s.). The team heads to Utah for games three and four on Thursday and Saturday. They return to Staples Monday for game five of this first round of playoffs.

Elsewhere in the west, a few notable upsets happened over the weekend as the fifth-seeded Rockets pounded the fourth-seeded Trailblazers 108-81 in Portland and the No. 6 Mavericks came out over the No. 3 Spurs 105-97 in San Antonio. In the east, the surprises were the sixth seed 76ers grabbing a 100-98 win over the third seed Magic in Orlando and the No. 7 Bulls beating the No. 2 Celtics 105-103 in Boston.