Dodgers are Back to Winning Ways 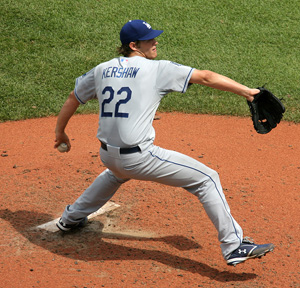 “Oh, God. Thank you!” Manny Ramirez was heard saying as he gestured heavenward once inside the Dodger dugout April 18, moments after hitting his first homerun of the 2009 season. The crowd of some 40,000, which missed this private Manny moment, was exploding with a cheer it seemed they had been holding in for months. After 36 at-bats, Manny was finally being the Manny of their dreams and memories.

Alas … Ramirez’s glory moment did not linger long when nearly five minutes later playing in left field he dropped a routine fly ball. Oddly enough the pattern repeated itself in later innings. On his next at-bat, he swatted a second homerun; again the enormous applause, and again in the following inning, another fielding mishap.

So it appears Manny is indeed back to being Manny and, taking the good with the bad, we should be grateful, because the Dodgers it seems are back to their old winning selves. (Oh God, Thank You!) While not exactly the same group of guys who walked away with last year’s Western Division Title, the Dodger ball club is endowed with a very similar passion for winning ballgames.

As the Dodgers head back on the road this week to defend their first-place status, they carry with them one very intriguing factoid; they are undefeated at home. Playing six games in seven days last week the blue crew made short work of the San Francisco Giants and the Colorado Rockies with outstanding performances from both their defense and offense.

Dodger hitters scored 50 runs on the homestand, an average of 8.3 runs per game. Starting pitchers Clayton Kershaw, Chad Billingsley and Randy Wolf each earned victories going for more than six innings and giving up less than three runs per outing. Even youngster James McDonald made a decent start, showing further signs of a bright future.

The spectacular homestand continued a recent trend of being dominant in Chavez Ravine. Since the all-star break of the 2008 season, the Dodgers have had the best home record in major league baseball. Asked how and why the Dodgers play so well in Los Angeles, manager Joe Torre responded with a chuckle, “Forty or 50 thousand fans help out a lot.”

Center fielder Matt Kemp had the same thought, “I guess it’s the fans. We got great fans, and we just try to give them a good show.”

The 24-year-old centerfielder has certainly done his part, batting .383, hitting safely for all of the first 13 games of the season and smacking two homeruns including a grand slam on the final day (April 19) of the homestand.

Yes, there is a very good show being played out at Dodger Stadium so far this year. Enjoying it as much as the fans are the players themselves. A palpable collective confidence is felt among the ball club. Some folks call it “swagger.” Catcher Russell Martin likes to call it “mojo.”

Whatever it is, the boys in blue are wearing it like it’s going out of style and playing a baseball show worthy of a World Series stage.