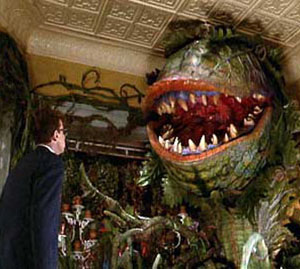 Back in 1960 Roger Corman directed a very low budget black comedy titled Little Shop of Horrors, which was remade in 1986 as a black comedy musical directed by Frank Oz starring Rick Moranis and Steve Martin. The film followed a man who comes into possession of a carnivorous plant from outer space and winds up feeding it people.

Evidently two versions are not enough, and the film is going to be remade a third time. Not exactly sure if this is going to be a musical or not, but if it is then it will be a remake of a remake. That’s right ladies and gentlemen; we’re starting to get remakes of remakes now.

The original is awesome, but the Oz version was a film I watched many times as a child, and I’m sorry but you can’t top that. From what I understand, Corman himself is producing the new version, and I suppose the argument is that they want to reintroduce old material to newer audiences, but my answer to that is “get Netflix.”

It makes no sense to make worse versions of films so that younger people will be exposed to the material. You can’t top the second one. Can’t do it. I love all the work that Corman has done throughout his career, and in no way do I think this is a reflection on him, but what’s going to happen 20 years from now when filmmakers (or should I say film-remakers) are remaking remakes that came out now? Oy vey!

When I found out last year that 20th Century Fox was actually going to go ahead with an adaptation of “Dragonball,” I did my best to contain my anger, and then I wrote about it in my column and wished them luck. After seeing the film, I don’t think my well wishes helped at all.

If anything, Dragonball is a shining example of what happens when you crumple up the source material you are adapting and shoot it into the trash through one of those little basketball hoops you put over the wastebasket. I’ve never seen the fan base of anything unanimously hate something so passionately before this.

That being said, I’m actually a really big fan of James Wong. I love The X-Files and I liked The One and his Final Destination films, but Wong just wasn’t the right guy for this. I’m not laying all of it at his feet, but I’ve never seen an adaptation where literally every single thing was done completely 100 percent wrong.

I feel entitled to say these things because the “Dragonball” story and mythos are very dear to my heart. I grew up on it. I watched every episode of the series, read every comic and played every video game (even the Japanese ones) throughout my childhood. And “Dragon Ball Z” was also something that inspired me to become a filmmaker in the first place.

Making a film version of “Dragon Ball Z” has been a dream of mine for as long as I can remember, and thanks to this film, that dream can still come true. Everything that the makers of Dragonball said they couldn’t do because it wouldn’t work on film will be done and given the respect it deserves in my movie. I absolutely believe that I was put on this Earth to make this film, and I promise the world that it will happen.

For crying out loud, we’re talking about one of the greatest Japanese mangas of all time! You don’t give something like that to someone who has no idea what it is. You give it to someone who values it like the works of Shakespeare. Let this be a lesson to all those who seek to do adaptations of highly respected and globally loved franchises: The only people who should adapt something like that are the fans.