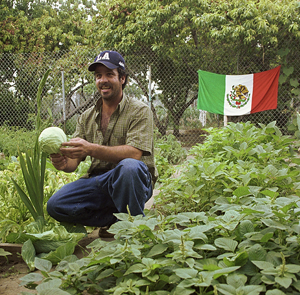 A South Central Farmer shows off a cabbage in The Garden.
(Credit: Courtesy of Black Valley Films)

There once was an oasis in South Central Los Angeles. Formed after the L.A. riots in 1992, the 14-acre community garden at 41st and Alameda was the largest of its kind in the United States. The South Central Farmers grew their own food, fed their families and created a community in one of the country’s most devastated and blighted neighborhoods.

The Garden is a look into the political and social battle over the plot of land that sustained vegetation in the midst of a community’s desperation. In one corner, though there are far too many players to name, the farmers – Tezozomoc, Rufina and Josefina – are the leaders of this movement. A Civil Rights lawyer, an ex-Black Panther and an ex-Brown Beret are several aids rallying behind the plight of the farmers.

In the other corner, Jan Perry, a Los Angeles City Councilwoman, and Juanita Tate, founder of Concerned Citizens of South Central L.A., have stolen millions of dollars from the city and the farmers through a phony land development deal. Even Mayor Antonio Villaraigosa was suspected of corruption; he received $1.3 million from the fast-growing retailer, Forever 21.

However, it is real estate developer Ralph Horowitz who is the ultimate villain in this real-life drama. The land was sold for millions less than fair-market value in a closed-door session of the L.A. City Council. The deal has never been made public.

Bulldozers, on Horowitz’s orders, uprooted the garden in 2006. Since then, over 350 families locked out of the land have taken their campaign to new heights. Currently, the land remains barren and undeveloped, though Horowitz claims he has plans to build a warehouse … a Forever 21 warehouse.

Nominated for Best Documentary at the 2009 Academy Awards, The Garden is a thought-provoking investigation into the prevalent issues surrounding race and class that are still firmly situated in L.A. society.

Director-producer Scott Hamilton Kennedy has gathered interesting people and follows a worthwhile lead to tell a story that seeks to be spread. However, the entire documentary feels a bit jumbled and incoherent. The multitude of main players delineates the storyline and confuses the viewer.

Though every point is not made perfectly apparent, the overall message and underlying allegory to the economic and social climate in America ring clear as a bell. After all, it may not be greener in other pastures.