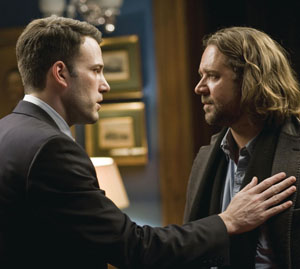 In fashion, women are advised to accessorize then remove one piece of jewelry before they walk out the door. That way, no one can ever accuse them of being over-styled. This is also a good rule of thumb for filmmakers as well. There is such a thing as doing too much.

In State of Play, Russell Crowe plays Cal McAffrey – a Washington, D.C. journalist. Cal is just the sort of guy you would expect to be writing your newspaper articles: He’s witty, kind of plump around the middle and chock-full of sarcastic one-liners.

Cal’s maintained a close friendship with his college roommate, Congressman Stephen Collins (played by Ben Affleck). The state representative is handsome, reeks of Kennedy charm and even has a beautiful wife (Robin Wright Penn) to boot. That’s why his involvement with a Washington sex scandal is so juicy when the story blows up following an embarrassing television appearance.

Cal sets out to exonerate his old pal (after all, the pen is mightier than the sword). However, in doing so, he uncovers a trail of intrigue and dirty deeds done not-so-cheap.

When an ambitious blogger named Della (Rachel McAdams) begins sniffing around for a story about Rep. Collins, McAffrey enlists her to help sway public opinion away from all the fiction surrounding the scandal and back to the facts. Both must deliver a compelling story while staying in the good graces of their editor (played by The Queen’s Helen Mirren). In the end, Cal winds up being the best mentor a young journalist could have, but uncovers some unpleasant details about his buddy in the process.

Kevin Macdonald has earned himself some serious Brownie points with State of Play. He does nearly everything correctly. The pacing is perfect. The casting is genius and the onscreen chemistry is the stuff of legend.

Crowe shines opposite dynamic women like Penn and Mirren. Jason Bateman is perfectly cast in a cameo as a coked-up publicist and straddles the intensity and comedy of the part like a champ. State of Play even manages to breathe new life into Affleck’s career with a performance worthy of an Academy Award.

Still, I come back to the “they did too much” concept. The ending – or what I’d hoped was the ending – was so satisfactory, that the added drama just seemed a cheap attempt to shock and titillate.

State of Play is currently in theaters.