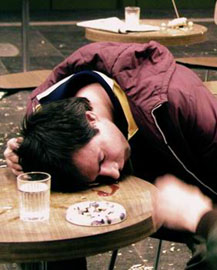 When it was released in its native Hungary in 2003, Kontroll quickly became the highest grossing film of the year and was entered as Hungary’s official submission for Best Foreign Film Oscar consideration. The high-energy film mixes comedy, drama, action, romance and surreal images in a story of a group of men who work in the Hungarian subway system.

Kontroll signals the feature length directorial debut of Nimród Antal, who was born in Los Angeles to Hungarian parents but moved to Hungary at the age of 17 to pursue an education and career in film.

"I think a lot of opportunities are given in Hungary," Antal says. "You don’t have the money or the technical background necessarily but you do have a willingness and an opportunity to work with a high caliber of people. I think I was given an opportunity that I wouldn’t have had here."

Kontroll played at the Cannes Film Festival in the fest’s Un Certain Regard sidebar and won the fest’s "Le Prix de la Jeunesse (Youth Prize)" which was selected by a jury of seven young cinema buffs. The film also collected prizes at several other international film festivals and earned Antal a best director nomination at the most recent European Film Awards alongside such heavyweights as Pedro Almodovar and Alejandro Amenabar.