Celebrate Earth Day: April 22 – and All Year Round 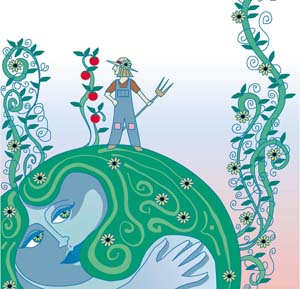 Earth Day is April 22, and as the so-called “green generation,” the holiday means more to us than ever before. It’s cool to be “green” now, right?

In that spirit, why not throw an Earth Day party or vow to change your habits? Instead of just another excuse to buy a keg, your party could be an opportunity to spread awareness by providing organic beer (available at BevMo!) and locally grown produce, or ask people to bring food they made using whatever’s already in their kitchen so you don’t have to buy anything at all.

You could even host a vegan cooking party; trust me, trying to make delicious baked goods and yummy treats without animal products is a fun adventure. Use plates and utensils made from recyclable materials, maybe even host a candlelit dance party and turn off the house lights.

Don’t let the stigma of being a leftist hippie stop you; today being “green” isn’t some idealistic decision, it’s an imperative. Make it fun, be proud of it, live it.

What else can you do in honor of Earth Day? There are tons of events going on in the city, or you can just gather some friends and do a beach clean up or make a pact to be more environmentally conscious and conservationist.

That includes using less water (according to the USDA, you’d save more water by not eating a pound of beef than you would by not showering for a whole year … so I guess less trips to In-N-Out?), turning off lights and using them less often, driving less (Public transport in Los Angeles does exist! Not to mention biking, which is environmentally friendly and body-friendly; but wear a helmet!), buying local produce whenever you can and being less wasteful in general. You know that five-pound container of cookie dough you bought from Costco that has been sitting in the back of your freezer all year? Next time, think about how much you will actually use.

As for events, the Los Angeles Neighborhood Clean Up Project is hosting an Earth Day Clean Up at Echo Park from 10 a.m.-12 p.m. on Saturday, April 25. You’ll see a bunch of people in green T-shirts meeting up at the corner of Echo Park Boulevard and Sunset Boulevard; they’ll bring the supplies and donuts if you supply the people power!

Songs 4 Earth, a network of ecologically-minded singers, songwriters, musicians, and engineers, will host a concert at Metropolitan Community Church Saturday at 7 p.m.. Saturday is also the Cahuenga Green Stage Festival from 10 a.m. to 7 p.m.; Santa Monica Boulevard between Virgil Avenue and Madison Street will be closed for an “ecological celebration of Life and Land.” This celebration focuses on the cultural heritage of Los Angeles, from the aboriginal people of Cahug-Na, who were the first inhabitants of East Hollywood, to the indigenous Tongva of the Westside.

Finally, kick off summer at WorldFest, a solar-powered celebration of music, the environment, animals and humanity on May 16 at Woodley Park in Encino. Best of all, TheFrankenstand – a 100 percent plant-based gourmet hot dog cart – will be there!

2010 is the 40th anniversary of Earth Day, so this year kicks off the Green Generation Campaign in preparation; the campaign is a two-year initiative meant to mark the beginning of a new era of personal, corporate and government responsibility for preserving the Earth. With negotiations for a new global climate agreement approaching in December, it is especially important that we get involved and make it known that we intend to embark on a new way of life. You can sign the Green Generation manifesto at www.earthday.net/greengeneration.