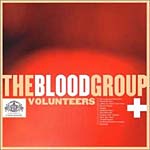 It’s a twisted world out there, and the Blood Group are here to celebrate it in style. This Long Island two-piece have attempted a smart, seductive electro-pop record that is at times innovative and inspiring, but is dragged down by too many mediocre moments for one to be able to truly enjoy it. The album’s electronic minimalism furthers the intrigue by successfully replicating the same sort of humble ambiance of the simple acoustic folk album.

With the release of Volunteers, James Jackson Toth (one half of the Blood Group) has already claimed that the band has recorded three more albums’ worth of demos. Perhaps their prolific future output could benefit from added concentration on individual material rather than sheer quantity. Especially when it comes to the gentler tunes sung by the other half, Jessica B, whose vocal resemblance to Dido is all too apparent. Meanwhile, the Toth numbers are far more interesting. This can especially be heard on songs like "King Of France," a captivating electronic representation of battalions en masse, with an occasional break for a cameo by the Renaissance court. "Cardinal’s Farm" features a sax that one could imagine being played by a creature from some netherworld of the Elder Gods; the song opens with what one could swear were samples from a Spectrum album.

The Blood Group’s music is nothing new, as every one of these songs have been heard before in some form or another by previous artists (brilliant, ground-breaking artists), like a fashion that’s been on the scene long enough to be just past the cutting edge. Still, it’s an interesting effort, and one which should tide listeners over while between better records.