Ghosts of Girlfriends Past : Matthew McConaughey’s Haunted by Love 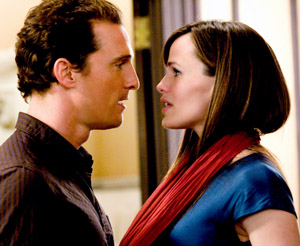 Matthew McConaughey and Jennifer Garner in Ghosts of Girlfriends Past
(Credit: Ron Batzdorff)

If Ebenezer Scrooge had been a notorious playboy with abs of steel, a sly smile and a Southern accent that oozed like warm honey, he would have been Connor Mead, a man who “loves women, all women … that’s the problem.”

Played by lovable lothario Matthew McConaughey, Ghosts of Girlfriends Past’s Mead is a wickedly delightful devil who relishes the only thing he’s truly committed to: his bachelorhood. When he’s forced to attend his brother’s nuptials and serve in the wedding party that includes his childhood sweetheart, Jenny (Jennifer Garner), he finds himself being haunted by ghosts, specifically the ghosts of his past, present and future girlfriends.

Director Mark Waters (Mean Girls, Just Like Heaven) says he went after McConaughey specifically because the role required an actor who could be “an incredible asshole in the beginning of the movie and get away with it.”

“You usually don’t get a character with that much bite where you’re thinking ‘I can’t believe they said that’ or ‘Whoa’,” McConaughey grins.

Since The Wedding Planner in 2001, McConaughey’s bread and butter has been similar films in the romantic comedy vein, but the supernatural, extraordinary measures in Ghosts were what drew him to the project.

“We never saw this movie as a romantic comedy,” Waters is quick to counter. “We always thought of this movie as a classic magical comeuppance comedy like Christmas Carol or Liar Liar. It’s an asshole guy in need of a comeuppance who has a magical intervention, and that’s how he learns to be a better man.”

Ghosts of Girlfriends Past releases in theaters May 1.