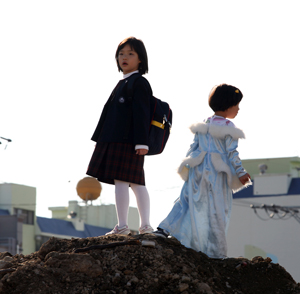 It’s back and gearing up for a showcase unlike any other. The 25th Annual Los Angeles Asian Pacific Film Festival (LAAPFF) kicks off April 30 and runs through May 7. Featuring 181 film screenings, five theaters and international directors from 26 countries, LAAPFF will showcase 35 feature films and 146 shorts throughout the eight-day fest.

Opening the festival, Tze Chun’s Children of Invention, which premiered to critical acclaim at the 2009 Sundance Film Festival, is a heart-wrenching drama about two young kids living illegally in a model apartment in a Boston suburb where they must use their imagination to medicate their boredom. When their mother goes missing, big brother Raymond must find a way to care for himself and his sister.

The story is a solid piece of cinema that looks to the audience for empathy. It succeeds in convincing the average moviegoer that there can be beauty and imagination despite meager circumstances.

Slated as the LAAPFF Centerpiece film is Treeless Mountain, which was a favorite at the 2008 Toronto International Film Festival. Inspired by events from the director’s early childhood, the film contributes to a theme that is woven among many of the movies at this year’s festival: abandonment and the bonds of family.

It depicts two young sisters who are left with their relatives for the summer. When their mother does not return, the girls are transported to their grandparents’ farm where they learn for the first time what it means to be part of a family.

Other noteworthy films screened at the festival include I Am That Girl, a story based in Los Angeles, Karma Calling, Love Exposure and Yamagata Scream.

The festival will also feature “Filmmaker Seminars.” Open to the public, the seminars include Asian American industry professionals who will discuss the burgeoning presence of Asian films internationally as well as specifically in Hollywood.

Departures, winner of the 2008 Academy Award for Best Foreign Language Film, is from Japanese director Yojiro Takita. The film takes a transcendent look into the Japanese culture and will close the festival.