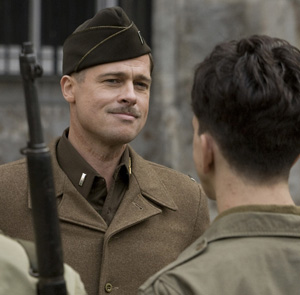 He wowed tweens in the Amanda Bynes romantic comedy She’s the Man. He sent hearts into overdrive in the Step Up movies. Now Channing Tatum impresses with his latest role in Fighting.

He plays Shawn MacArthur, a tough drifter from Alabama trying to hustle a living in New York City. One afternoon while selling books on a busy Manhattan street, MacArthur is robbed by some thugs. He puts up a fight, though, which results in such a brawl that he’s forced to flee into a nearby subway station. Later that evening, MacArthur runs into the thief and his minions.

Unbeknownst to him, Harvey (Terrence Howard) is not a cold-blooded criminal, but in fact, a guy looking for a big opportunity as well. He gives MacArthur a place to stay. Harvey also offers him the chance to make some real money putting his fighting skills to the test.

MacArthur’s first match goes well. So to celebrate, he winds up in a club and is re-acquainted with a gorgeous Puerto Rican girl (Zulay Henao) he met just before he was robbed.

Wouldn’t you know it; MacArthur also comes face-to-face with his long-time nemesis, Evan Hailey (played by Brian J. White). He and Hailey butt heads all over town until the final climax when these two enemies are paired against each other.

Fighting is a stylish urban drama and delivers many surprising performances. The violence is also totally realistic and graphic. It’s got the same heart as Raging Bull – an equally great movie about a fighter that starred Robert De Niro.

Unfortunately, there is a little trouble about who this film was actually made for. Howard hardly appears in the movie trailer, but Fighting seems anchored around his character.

Meanwhile, teens and young adults are liable to pack theaters looking to see Tatum in action. While he does get significant screen time, most of that is spent as a secondary character to the movie’s other storylines.

The MacArthur character gets very little in the way of a man vs. man moment. The only real insight we’re ever given into his psyche is via a half-assed monologue delivered by Tatum just after his love scene with Henao.

Thankfully, when those petty little irritations start to annoy, Fighting comes back strong with a powerful left hook and redeems itself as a good movie to place your bets on.

Fighting is currently in theaters.