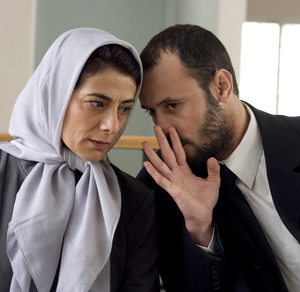 In honor of Israel’s upcoming birthday, with all the country’s cultural richness, diversity and politics both sour and sweet, what better way to celebrate than by seeing Lemon Tree, by director/co-writer Eran Riklis?

Perhaps Peter, Paul & Mary said it best: “Lemon Tree very pretty and the lemon flower is sweet. But the fruit of the poor lemon is impossible to eat.”

Lemon Tree focuses on a courageous, determined Palestinian widow, Salma (played by Hiam Abbass), whose beloved lemon grove is her family legacy, an inheritance from her father. When the Israeli Defense Minister moves in next door, and the trees are declared a security threat, Salma, with the help of a bright, passionate attorney, Ziad Daud (Ali Suliman), takes the case all the way to the Israeli Supreme Court.

The two build a close friendship and working relationship that changes their lives forever. Her legal battle even stirs the sympathy and raises the interest of the Minister’s wife, Mira Navon (Rona Lipaz-Michael). In the chaos of the ongoing tension on the border between Israel and the Occupied Territories, Salma finds herself in her own internal struggle, trying to maintains inner strength while fighting for her trees, with blood, sweat and tears, just like the whole region has done for decades.

In this work of passion and dedication, Riklis declares his need to share important stories, events and characters of depth. His choice of tree symbolism and imagery as the focal point of the film is quite profound; in some of the film’s dialogue, it is said: “Trees are like humans. They have souls and roots and feelings and are difficult to uproot. This country has had too much blood and politics. Now there’s a lemon grove between us – sometimes our country has no limits.”

Like the song says, lemons are pretty but impossible to eat. Lemon Tree will hopefully serve to break stereotypes, create tolerance and give food for thought.