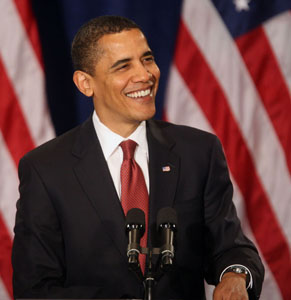 One hundred days into a presidency is, on its face, a perfectly irrational delineation of time. It is neither a third nor a half nor a quarter of a year. It stands with no particular significance in the legislative or governmental calendar of our country. Its inauspicious date, April 29, draws corollaries to that similarly mundane entry in King George III’s diary on July 4, 1776. Nothing important happened today.

George was proven wrong. He never knew, without the aid of his Blackberry or cadre of royal bloggers, that this particular day – for the 300-plus million Americans who live now and the countless millions more that lived and died under the stars and stripes of a new flag – was indeed the start of something quite important. The day itself was immaterial, but what it stood for has come to mean volumes.

It is in that spirit, then, that we look back on President Obama’s first 100 days in office, assess his triumphs and failures under a short lens and wonder with reckless abandon what the remaining 1,360-odd days of his (only? first? best? worst?) term will hold.

With the marvelous pageantry of the assembled hopeful millions and the ineffable poise of a new president, First Lady and first family, Day 1 of Inauguration Day must stand as a high water mark in the history of this country. The moment, marred only slightly by Supreme Court Chief Justice John Roberts going unintentionally off-script when administering the oath of office, was note-perfect in almost every other regard. All the greater pity, then, when Obama’s first days in office proved so uneven.

He was up when he turned the American page in the world’s book by ordering the suspected-terrorist detention facility in Guantanamo Bay to be closed (eventually) on Day 3; he was down on Day 15 when he lost perhaps his best-suited cabinet appointment and mentor in former Senator Tom Daschle due to back-tax problems; he was up on Day 4 when he rescinded the “Mexico City Policy” that insisted all non-governmental organizations who receive federal support could not perform or encourage abortion services in other countries; he was down when he saw his second pick for commerce secretary, Republican Senator Judd Gregg, withdraw on Day 24, that after a pay-to-play scandal forced a main ally, New Mexico Governor Bill Richardson, to remove his name from consideration for the post a month earlier; he was up when he publicly and unequivocally declared that the United States does not torture on Day 36, this while elegantly parrying the ludicrous, snarling attacks of gasbag Rush Limbaugh and vampiric Dick Cheney; he was down when his financial wunderkind Timothy Geithner stumbled through his confirmation as Treasury Secretary with back-tax issues (Day 2) and when he learned on Day 52 of a slew of AIG executives scoring bonuses off taxpayer bailout money at a time when restoring public confidence in the government and the economy was essential; he was up when he gave his first presidential televised interview on Day 7 to Al-Arabiya, emphasizing his outreach to the Muslim world; he was down when he found himself publicly rebuffed in his efforts to reach across the aisle in Congress to gain Republican support for his stimulus bill on Day 9, eventually settling for a measly three GOP senators and no members of the House on Day 26, but he ultimately ended up when he passed the largest stimulus bill in history with new allocations for education, infrastructure and alternative energy on Day 29.

If those days read like a whirlwind, they were. If his first days were consumed with the relative Beltway grind of back-taxed confirmation hearings and an epic stimulus battle smacking of partisan politics as usual on Capitol Hill, the latter half of his first century of days must be seen in a series of remarkable images.

Freed, albeit minimally, from the all-consuming charge to single-handedly save the beleaguered economy after the stimulus package, President Obama stood for the first time before both chambers of Congress on Day 36 and delivered his first “State of the Nation” address in a speech both eloquent and determined. An enduring image that will pass beyond the first hundred days is this tech-savvy president in his Saturday YouTube addresses to the nation (Day 5 onward), invoking digital echoes of Franklin Delano Roosevelt as he reassured an economically-pulverized nation in his modern equivalent to FDR’s fireside chats.

Town halls to discuss how the crippling collapse of the housing market and credit markets could not cripple the American spirit followed, buoyed by a campaign-type atmosphere as Air Force One crisscrossed the country on Days 21, 22 and 58 among others, ultimately ending up at the Burbank studios of “The Tonight Show.” On Day 59, Obama became the first sitting president to be interviewed on a nightly talk show and made it through a remarkably trenchant interview by Jay Leno with only one gaffe – suggesting that his paltry bowling skills might be a match for the Special Olympics.

President Obama also took his agenda of regulatory oversight bolstered with Yes-We-Can optimism to the international stage. If he met with overwhelmingly glowing reviews for his decorum and openness during the G20 Summit in London on Day 73, he rode the wave of goodwill generated by his wife, prompting him to steal a line from John F. Kennedy and note, “I am the man who accompanied Michelle Obama to Europe.” The First Lady’s friendly embrace with her husband and Queen Elizabeth on Day 72 and the First Couple’s walk down the carpet in Prague’s Hradcany Square on Day 76 were images of an administration charting a fresh course of foreign policy.

While his critics will argue that likeability does not necessarily translate to progress or power in the world – and they are right – Obama’s conviviality on his trip stands as a far better representation of the personality of the vast majority of Americans: willing to listen, keen to cooperate and eager to repair the bridges that years of terror-induced mania burned across the globe.

So what can we say of these first hundred days? Those who expected a superhuman erasure of all the world’s ills in the unfettered glory of a new golden age are now frustrated at the failures of an all-too-human chief executive. Those who waited for the frailty, cowardice and collapse of a matchstick man big on speeches but short on substance are now similarly disappointed. Those who imagined a president who could offer a rousing reading of Where the Wild Things Are to children assembled on the lawn of the White House during an Easter Egg Roll celebration (Day 84) and then head across town for an economic infrastructure speech at the Department of Transportation were spot on.