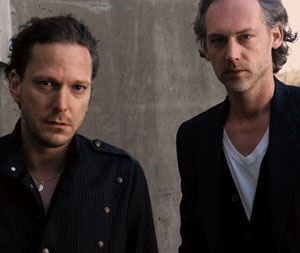 Certain days call for the right album that can translate into music an emotion you feel as you work, drive home or relax in your place. With No Hassle, Viennese electronica duo Tosca condenses the feeling of ultimate tranquility in a dozen tracks.

What is relaxing differs from person to person, but to Richard Dorfmeister, the answer is simple: no binding obligations. No hassles.

Together with Rupert Huber, Dorfmesiter has brought his vision to worldwide audiences since 1994’s breakthrough single, “Chocolate Elvis.”

“There was a small vocal sample that sounded operatic … it sounded funny,” Dorfmesiter recalls. “Our record company needed a band name to enter the song in their system.”

After tossing around some names, they settled on Tosca, a famous Italian opera. Fifteen years later, many world tours, five albums and prominence in the electronica genre, Tosca’s main concern now is continuing to push the envelope.

“A lot of artists have a problem with [originality],” Dorfmesiter says. “You have to express yourself in whatever way possible. It might be boring, or it might be amazing.”

“When a song comes out as something that resembles us, we end it right there,” Dorfmesiter says. “What makes a track perfect is the feel for it, not the technical [aspect] or detail of it.”

The album isn’t perfect, but it’s all about the vibe and the emotions it communicates once it plays through speakers or headphones.

“We can live with the imperfections,” Dorfmeister says.

Beginning with “My First,” Tosca creates an ambient landscape that never grabs hold of a horizon, because the beats just keep flowing into the next track. Mostly instrumental and peppered with interesting samples, No Hassle evokes a complete surrender of worry.

It almost feels like serenity à la carte, with songs like “Springer,” the title track and “Elitsa.” These songs only feel right when listened to from start to finish. The album doesn’t lend itself to the conventions of life on shuffle or a playlist.

Although it is a bit ironic to describe an electronica band as organic, the term seems fitting because of their predominant use of bossa beats and jazz compositions.

“We tried to do something that reflects our lives,” Dorfmesiter points out. “To cut down on the things we don’t need.”

Indeed, the album never gives the slightest hint that it is contrived. Dorfmesiter indicates that No Hassle is a new beginning for Tosca. Fans can expect future albums to resemble its vibe.

Their carefree approach to songs also includes a little humor. The tongue-in-cheek “Oysters in May” originates from an anecdote Dorfmesiter and Huber heard while recording the album in May 2008.

“We were told by somebody that it is bad to eat oysters in months that do not end with an ‘r,’” Dorfmesiter recalls. “For some reason the oysters are not good then.”

Though the band still ate oysters (and didn’t regret doing so), the song shows a very human side to a very technically oriented band: When humans are told not to do something, they do it anyway.

Such humanity is what sets Tosca apart from your dime-a-dozen electronica band with trite, repetitive beats. Such distinction merits at least one-hour out of your busy life to sit down without a care in the world and pop in an album that’s the auditory equivalent of a horse tranquilizer.

No Hassle is currently available. For more information, visit tosca-nohassle.com.