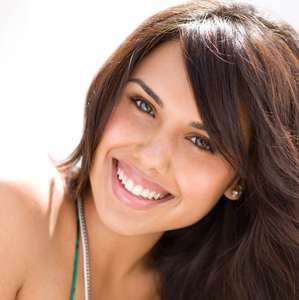 She realized that she wanted to be a singer at the age of 3, and now 16 years later Kristinia DeBarge is officially launching her career with the release of her debut single, “Goodbye.” And if Kristinia’s last name sounds familiar it’s because she’s the daughter of James DeBarge, the keyboardist and founding member of Motown’s hit-making group from the ’80s, DeBarge.

Kristinia says that to test the waters she went into the studio and cut a duet called “How I Feel Inside” with her famous dad.

“Our session ended at 4:00 a.m., and my dad asked me after all those hours and after all that work if I still wanted to do this,” the 19-year-old says. “I answered yes, and that’s how he knew I was serious about being a singer.”

Babyface is writing and producing Kristinia’s as-yet untitled full-length that’ll drop this summer; “Goodbye” is out this week.

Insomniac Events has announced the dates for this year’s Electric Daisy Carnival, which will once again take place at the L.A. Memorial Coliseum & Exposition Park in downtown. The electronic music blowout stretches to two days this year with Paul Oakenfold, ATB, Eddie Halliwell and Boyz Noise scheduled to headline on Friday, June 26, while Fatboy Slim, Paul van Dyk, David Guetta, Benny Benassi and Roger Sanchez close out the party on Saturday, June 27.

Besides having five stages for musical performance, the carnival will feature art installations and more full-sized carnival rides than ever before. Last year’s event sold out with 65,000 attendees, and 100,000 revelers are expected this year. Individual tickets and two-day packages are on sale now at insomniac.com and selected retail outlets.

If you missed the Crystal Method at Coachella here’s your chance to spend some quality time with the group in Las Vegas. The band is celebrating the release of their upcoming album Divided By Night by offering fans a chance to win a V.I.P. trip to Vegas to see the band perform at Mandalay Bay Hotel & Casino on May 22.

The prize package includes a private meet-and-greet with the band, a hotel room at Mandalay Bay, dinner at the exclusive Foundation Room and an autographed copy of the Crystal Method’s entire catalog. Divided By Night is due May 12, but the album’s first single, “Drown in the Now” (featuring Matisyahu), is available now.

The Open Happiness crew – Cee-Lo, Janelle Monae, Patrick Stump of Fall Out Boy, Brandon Urie of Panic at the Disco and Travis McCoy of Gym Class Heroes – has teamed with imeem, Coca-Cola and Remix magazine to hold a contest to find a remix that takes their song “Open Happiness” to a whole different level. Contestants need to visit imeem.com/openhappinessfans to download stems provided by producer Butch Walker and then upload their finished remix by May 26 in order to be eligible to win some pretty cool prizes, including an NS 7 DJ mixer and a replica Coca-Cola machine for the first place winner.

Two runners-up will receive an APC 40 Akai Ableton Controller, and all winners will get digital subscriptions to Mix, EM and Remix magazines as well as a poster signed by all the members of Open Happiness. Winners will be determined in part by the general public, so contestants should also be prepared to promote their mix and seek out positive ratings at all social networking sites.