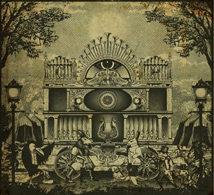 Crippled Black Phoenix is enamored with the trippy sound that was virtually invented and developed by Pink Floyd. Several songs instantly call that band to mind; “Littlestep” would not be out of place on The Wall, “Wendigo” sounds like something from Meddle and “Burnt Reynolds” is definitely patterned after “Welcome to the Machine.” The songs are different enough though that you’d never mistake them for actual Pink Floyd songs, unlike “Rise Up and Fight” where CBP mimic I Robot-era Alan Parsons Project to the letter.

Another band from the classic era that dabbled in this type of music was Manfred Mann’s Earth Band and CBP give a nod to that group as understated vocals, acoustic guitar and piano all cower under ominous reverberating electric guitar on “Whissendine,” one of the album’s highlights. It’s good to hear a band picking up this particular torch and keeping it burning brightly.