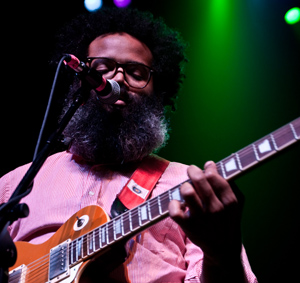 Kyp Malone of TV on the Radio
(Credit: Anna Webber)

Three black guys and four white guys comprise the band, whose sound is a detailed mix between Afrobeat breakdown, funk delicacies, flattening punk rock and electro-synth reverberations. Everyone was dancing and sweating. Frontman Tunde Adebimpe danced like a fish out of water, while Kyp Malone (vocals, guitar, loops) killed it with a voice sometimes reaching frequencies of Al Green heights. The most crowd response came from songs like “Wolf Like Me” and “Staring at the Sun,” and the die-hards were dead on with every word.