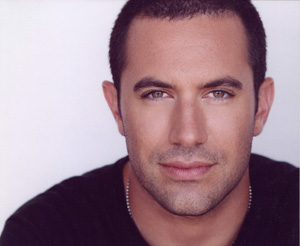 Max Leavitt is boldly and wonderfully verbose. The 30-year-old auteur could also be described as the hardest working man on Theater Row.

His new goth-punk dark comedy, “Dead Therefore I Am,” is currently playing at the East Theatre at the Complex.

The lead character, J.T. Blackwell, is a suicidal wreck who delivers the play’s opening monologue as a decapitated head in a basket. Leavitt, who wrote the play and portrays Blackwell, says the character is not autobiographical, but a thinly veiled alter ego.

“The common cold of psychopathology is depression,” says Leavitt.

He’s been in therapy since age 15 and personifies his depression as a black dog, much like his hero, Winston Churchill. (Leavitt’s production company, Last Lion Productions, is named after Churchill’s nickname, The Last Lion.)

In “Dead Therefore I Am,” Blackwell’s black dog is personified as the god Anubis, played by actor Nicholas Tucci, wearing a dog’s head.

“Dead Therefore I Am” began as a one-man show influenced by Hamlet’s “To be, or not to be” monologue and evolved into a character-driven piece as a result of Leavitt’s work in London. He worked hard to get a slot in a class with Sir Ben Kingsley at Oxford. It was there that he discovered “the black dog.”

Leavitt keeps his black dog at bay via hard work and sheer productivity. The actor/writer/director/songwriter/poet/musician doesn’t have much time for depression.

“There’s no such thing as luck in show business,” says Leavitt.  “Success comes from hard work.”

“Dead Therefore I Am” runs through May 24 at the East Theatre at the Complex. For more information, visit complexhollywood.com.

Comedy
Impractical Jokers aka The Tenderloins, Serving Comedy Up "Well Done": Live at The Grove of Anaheim (1/17)
3,734 views