Doves: Brit-pop Band Takes over Some Cities and More 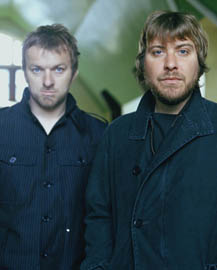 The isle of England has produced some of the most amazing musicians and artists in history. Soon, rock legends such as Radiohead and The Beatles will be discussed in the same breath as another British powerhouse: Doves. Hailing from Manchester, in the north of England, Doves are a trio that recalls the influences of these masterful predecessors, while adding their own unique shot of ambience and depth to the style that has become affectionately known as Brit-pop.

"We’re not so naive so as to think we are going to take over the world," laughs Doves drummer Andy Williams. "We want to build everything slowly. We don’t want to be a flash in the pan."

The band has traced a slow and steady path into the limelight since releasing their first record five years ago. Before they were known as Doves though, they went by the name Sub Sub and were the toast of the British dance scene, pushing the boundaries of the acid house culture that permeated the music scene in the late ’90s.

The band reemerged as Doves with a solid rock core on Lost Souls, a disc that sounds like a dreamy trip of its own. Songs often go on for minutes at a time without vocals, exploring the dark recesses of the human mind through piano and acoustic guitar.

Their 2002 followup, The Last Broadcast, took the band’s sound a step further, shoving them into the mainstream with the hit "There Goes Fear."

Their new disc, Some Cities (EMI), finds the band in a more straightforward place, featuring songs that are to the point and almost tangible. This is quite a change from the airy, ethereal sound that they espoused on their earlier releases.

"We try to give each album its own character," explains Williams. "The songs lead you down their own way."

The newer songs reflect a more urban sound, which comes from "being shocked at seeing Manchester change every time we come home from tour," says vocalist and bassist Jimi Goodwin.

The band, which is completed by guitarist Jez Williams, is currently on tour across Europe and will be returning to the States for the Coachella Music Festival in May, with an American tour to follow.

Doves’ fans swear that the in-person experience at one of the band’s live shows is "life changing."

"We pump up the energy more for live, it’s a different sort of beast," Williams explains. "These new songs lend themselves really well to that; they have a lot more edge."

Unlike most bands which have only one songwriter, Doves have three.

"We are very unique in that all of us write the music. … We’ve all got different approaches to the process," notes Williams.

Whether or not Some Cities will be the record that finally solidifies Doves as the vanguard and zenith of British music remains to be seen. If appearances on "The Tonight Show," widespread critical acclaim and a number one spot on college radio are any indication, however, this band is about to take a giant leap from being the best kept secret in transatlantic sonic exploration to becoming the sound that defines a moment in history.

Some Cities is currently available. Doves will perform April 30 at the Coachella Music Festival in Indio. For more information, visit www.doves.net.