And...Another Tie for the Galaxy 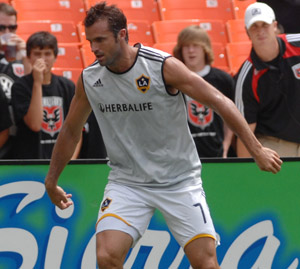 The L.A. Galaxy cannot seem to find their way to a victory, as they collected yet another draw in Colorado Saturday night.

Los Angeles tied the Rapids 1-1 after forward Landon Donovan managed to net a goal in the closing minutes of the match, which helped the visitors come away with a point. It was his third goal of the season. Veteran defender Chris Klein received the assist on the play after he made a low, firm pass to Donovan inside the box.

The Galaxy now sit in second to last place in the west with four points.

Colorado’s Colin Clark scored for the home squad in the 59th minute, but the 1-0 edge only lasted 23 minutes.