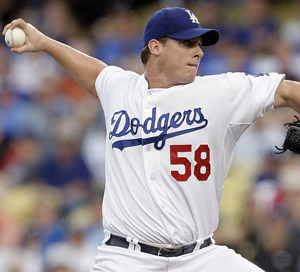 The month of April is nearly over, and much has been revealed about the Dodgers this season. To a large extent, the preseason predictions have been accurate that they are the team to beat in the National League West, a division considered among the weakest in baseball. Still, the Dodgers would agree, it is far too early to get comfortable. Not with the pesky San Diego Padres nipping at their coattails.

This week’s four-game series against the Padres should be very telling of the kind of division race we may see down the stretch. A concern for the Dodgers, as it has been since the earliest days of spring training, is the starting pitching rotation.

Chad Billingsley, who ironically struggled in spring, has assumed the role of ace by winning all four of his starts and posting an impressive 2.05 ERA. The veterans Randy Wolf and Eric Stults (taking the spot of injured Hiroki Kuroda) have pitched with relative consistency, but have been far from dominant. The big risk was on youngsters Clayton Kershaw and James McDonald, and they have proven to be very risky indeed, failing to go six innings for each of their last two starts and having opposing hitters jump all over them in disastrous innings.

With a long season to be played, the rise and fall of pitching fortunes is to be expected, but it doesn’t hurt to speculate about possible replacements. On Sunday, April 26, while Kershaw was getting shellacked in Colorado, giving up nine runs in five innings, Dodger prospect Eric Milton pitched six scoreless innings for triple-A Albuquerque.

Other hopeful news from Albuquerque is the report on veteran Jeff Weaver, who has been promoted to a starting spot. Weaver, at age 32, has been through the trenches, including World Series experience, and may be just the ticket to stabilize an erratic pitching staff.