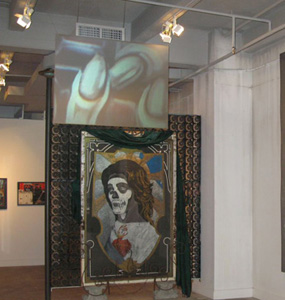 Artist Willie Herrón is an undeniable part of the history of Los Angeles, and now at the Federal Art Project, you can catch the inaugural exhibit of his new paintings and older work.

Herrón grew up in City Terrace, across the street from Cal State L.A., just around the corner from an alley where his brother was stabbed by local gangbangers. The city literally tried to whitewash two famous murals Herrón painted on the same alley wall where his brother was stabbed with four coats of white paint. Herrón is in the process of chipping off these layers of paint, layer by layer, and with each layer, he uncovers the past, letting the hidden history underneath come to life and breathe again.

Not only does Herrón have an artistic legacy that is being honored at the current exhibit downtown, but a musical one. Anyone interested in the comprehensive history of “punk” music would want to know Herrón helped to co-found a punk band, Los Illegals, in the 1980s here … during a time better known for the “punk” movement being created by the Sex Pistols, the Ramones and the Clash.

Even though he isn’t given the credit he deserves, Herrón was hard at work not only with his co-founding of Los Illegals, but helping to co-found a venue, the Vex, with Sister Karen, a Chicana nun from the eastside. The Vex allowed the divide – created by the L.A. River, but also by huge cultural divides – between the Chicano eastside and the westside (who didn’t accept any kind of “punk” music other than the kind that they “understood”) to at least temporarily disappear inside its walls.

Just like with Herrón’s murals, he is chipping away at the whitewashing of L.A.’s history, not only through his art, but also through the power of his music. He continues to keep Los Illegals alive and still makes the Vex a safe place for punk music to thrive and to entertain new generations (including his own children).