Spielberg And Cruise: Directing and Acting Duo Wage a ‘Realistic’ War of the Worlds 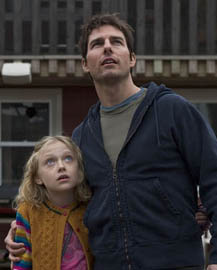 "It’s the biggest, smallest movie that we’ve made," says Tom Cruise in a February interview, taking a break from shooting a scene for the updated adaptation of The War of the Worlds.

In the Steven Spielberg-directed film, Cruise plays everyman Ray, a dockworker who struggles to save his family in the midst of a devastating alien invasion. It’s this human story, embedded in epic events, that drew the actor to the project.

"I’m playing a father in this," he explains. "You know I can play a father ... (It’s) very important to me in my life." Cruise has two adopted children with ex-wife Nicole Kidman.

Reuniting with Spielberg, his Minority Report director and friend, didn’t hurt either. Both men are smiling and relaxed as they sit in a small inn in Piru, Calif. The actor is still in his movie wardrobe: jeans, worn navy blue hooded sweatshirt and brown leather jacket.

Just half an hour earlier, Cruise was attempting to creep a van through a crowd of 700 extras playing refugees whose homes were demolished by aliens. In the scene, Cruise’s character has the only working vehicle in the city, which causes the hapless survivors on foot to riot and pull him from the van.

A group of journalists observing the scene could barely see the van – much less glimpse the star through the vehicle’s windows – while huddling under a tent several yards away to avoid a soaking by the rain machines overhead. Ironically, the day’s shooting schedule had to be pushed forward to avoid the real rain that was forecast for later that evening. Apparently, genuine precipitation is too inconsistent for filming, one reason Spielberg had to complete his New Jersey shoots at the beginning of production.

"You can get a great day and it’s beautiful and it’s snowing and then two days later it’s gone," explains Spielberg. "And it’s hundreds of thousands if not millions of digital effects and physical effects to snow in 50 acres of city streets and farmland."

Although War is based on the 19th-century novel by H.G. Wells, it’s the 1938 radio adaptation that inspired Spielberg to bring the tale to the big screen. The notorious broadcast written by Orson Welles and Howard Koch caused widespread panic when listeners mistook the faux news reports for the real thing, forcing authorities to step in.

"I bought the last surviving War of the Worlds radio script that had not been confiscated by the police department when they raided the Mercury Theater and destroyed every single radio play," says Spielberg. "The only copy that survived was at Howard Koch’s house (because after) a three-day crash schedule to get it ready for air, he just crashed and went to sleep and was not at the theater when his play was performed."

"The film is ultra-realistic. It doesn’t have the sense of blithe adventure of Independence Day," he says, referring to the 1996 film starring Will Smith. "In the shadow of 9-11 there is a little relevance with how we are all so unsettled in our feelings about our collective futures and that’s what I think when I reconsidered War of the Worlds."

Spielberg doesn’t intend for his film to be all angst, anger and alien antagonism, though. As with his two previous alien films, E.T. the Extra-Terrestrial and Close Encounters of the Third Kind, he’ll have plenty of laughs to relieve the tension.

"The humor comes out of the natural insanity of this family simply on an odyssey for survival," says Spielberg, before Cruise interjects, "Here’s the thing: maybe we’re the only ones who think it’s funny ... (and) are laughing at this moment – and that’s OK."