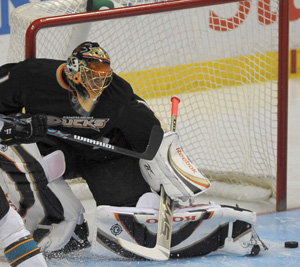 One shark’s tooth is probably sharp enough to do more than merely ruffle a duck’s feather. Too bad ducks do not have any teeth. Then again, even if they did, I doubt those tiny little teeth lining their ever-so-cute yellow-colored bills will do any more than tickle a shark’s rough grey exterior.

Conversely, a pair of shark’s teeth can probably send the cuddly little fowl to duck heaven, leaving those ruffled little feathers sprinkled all over the wavy waters of the Pacific Ocean. If the shark bites the duck in, oh, let’s say the wing, logic says that wing will be red with blood.

Simply put, if a duck and a shark go to battle in the Pacific Ocean (or any other body of water, for that matter), the duck will always end up with a pair of red wings and the shark will plunge into the depths of its aquatic home searching for the perfect side dish to compliment its newfound lunch.

Of course, if you are a duck who resides in the Pacific Division of the NHL, logic is apparently suspended and the natural supremacy of the food chain is apparently countered by parity.

When the San Jose Sharks finished the 2008-09 regular season with the league’s best record and found out they would host the meager Anaheim Ducks in the first round of the Stanley Cup Playoffs, there may have been a few who were ready to feast. Instead, the Ducks came into San Jose and emptied the Shark Tank (err, I mean, the HP Pavilion), forcing another year of Stanley Cup famine in Northern California.

It was a classic case of David versus Goliath, or, in this case, shark versus duck. The first round series literally pitted best against worst.

No team scored more points than the Sharks during the regular season, their 53-18-11 record and 117 points earned them the Presidents’ Trophy. Conversely, the Ducks snuck into the playoffs, merely finishing the season with a 42-33-7 mark, the 91 points being the fewest earned of the final field of 16.

Yet, six games into the Stanley Cup Playoffs, the Sharks withered away into the depths of the cold waters of the San Francisco Bay located just a few miles north of the HP Pavilion, while the Ducks avoided a clipping of their wings and advanced to the second round date with Detroit.

Somehow, the Sharks managed to lose all three home games against the Ducks. Can you imagine a meager duck peacefully meandering in the Pacific Ocean somehow managing to defeat a shark in three consecutive attempts? I am beginning to believe the NHL’s version of the aquatic beast is quite the disgrace to its hunter-like brethren roaming the high seas.

Red Wings head coach Mike Babcock said his boys will not get into any altercations against the Ducks, telling the media, “There won’t be any fights because we don’t fight.”

Perhaps they are going to take the Dick Cheney approach to Duck hunting instead? I certainly hope Babcock has a plan in place for his boys when they are in the blind.

He will certainly need a plan to figure out Anaheim goalie Jonas Hiller, who had a stellar 1.64 goals against average in the six-game series against San Jose. Hiller will try to take his game to another level, as this time his Ducks will attempt to throw the Red Wings into another body of water – Joe Louis Arena is rather close to Lakes St. Clair and Erie.

Indeed, the second round match-up between Anaheim and Detroit will be intriguing, as it is a battle between the last two Stanley Cup champions, with Anaheim winning in 2007, Detroit winning in 2008. It was Anaheim who eliminated Detroit in the 2007 Western Conference Finals, motivating the Wings to (successfully) chase the Stanley Cup harder in 2008.

While Detroit has won five consecutive playoffs series since its elimination to the Ducks in 2007, the team was unable to defeat Anaheim in four regular season games this past season.

Storylines and subplots abound, the Ducks’ path to the Holy Grail of sports appears to be quite challenging, since they will not have home-ice advantage in any playoff series. Then again, Anaheim has proven they can beat Detroit, even in the playoffs.

In years past, the Ducks have hopped on the back of a hot goalie, once advancing to the Stanley Cup Final as a seventh-seed behind the hot goalkeeping of Jean-Sébastien Giguère. This week, the Ducks are hoping Hiller is the second coming of “Giggy” as the last remaining NHL squad from California will soar above the competition and bring the Stanley Cup to Southern California for the second time in three years.