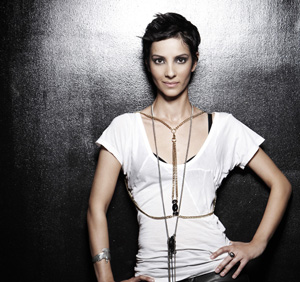 At first glance, most people might not know what to think of Sonita Henry. After all, the British beauty is an outright stunner, born to Nepalese and Scottish parents. She gives off the same elusive sex appeal that has created instant stars out of Freida Pinto and Scarlett Johansson. But what most people may not realize is that she’s probably the most down-to-earth actress to come along in quite some time.

Henry is about to explode into theaters in the much-anticipated Star Trek film. Her character is integral to the early origins of one of its lead characters.

“I play the doctor who delivers the baby [Captain] Kirk,” she says.

This isn’t Henry’s first induction into science fiction. In 1997, she played a presidential aide in Luc Besson’s The Fifth Element. However, working with J.J. Abrams held a special place in her heart.

Her shot came when the über producer-writer-director announced that he would be taking on and updating one of the greatest and most lucrative franchises in film and television history. For some, the novelty of collaborating with such a top name in the industry might have worn off after a couple of weeks – but not for Henry.

“Oh, I mean, first of all, J.J. Abrams is an absolute genius – the cool guy,” she explains. “I’m sure he doesn’t think of himself as the cool guy, but you absolutely just want to sit at his feet.”

That said, her director did put his cast through the ringer on the blockbuster, starting with a very taxing time on set.

“The most challenging part was the first day. We were down at the Long Beach power station, which was doubling as the SS Kelvin. They had wet the floors, and about 50 extras were running full speed at us. I remember one of the extras ran full speed at [the Kelvin engineer] and knocked him flat,” she recalls.

Abrams spent a lot of time rehearsing his actors and extras, but surprisingly, Henry and a lot of her co-stars did their own stunts.

“We didn’t have any doubles,” she admits, save for the stand-ins used for lighting and blocking.

But that’s not even the weirdest aspect of the Star Trek shoot. It seems that Henry got a rather unusual request from the filmmakers when she least expected it.

“They wanted me to shave off my eyebrows,” she says. The makeup department and even Abrams felt that it would create a much more authentic look for her otherworldly character. She refused time and time again and is even able to laugh about the experience now.

But for the actress, the rigors of a big budget motion picture are all in a day’s work. There is even one challenging genre that she would love to tackle if only she were offered a dream role.

“Comedy,” she confesses. “I never get asked to do comedy. I guess people just expect me to be running around with a gun or something like that.”

Henry admits to loving the British series, “‘Absolutely Fabulous,’” and jokes, “My life is Patsy Stone!”

As for the future of her career, she’s seriously hoping to partner up with Hollywood’s elite and working with the best directors on the scene today. So if you’re reading this, Peter Jackson, Tim Burton or Guillermo del Toro, there’s an enchanting actress who’d like a moment of your time.

Star Trek releases in theaters May 8.