Rudo y Cursi: A Bond Between Brothers and Friends 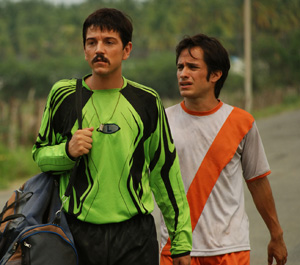 The conglomerate of talent involved in Rudo y Cursi consists of some of the best and brightest Mexican filmmakers working in Hollywood today.

Del Toro has a lighter take on the group’s fiercely loyal friendship, saying, “This is the Darwinian process of all the sub-species who didn’t play football, the kids who got beaten up at school; we got together. This is like Revenge of the Nerds. This is the nerd squad.”

The Hellboy director describes Rudo y Cursi as “a very simple fable about two brothers who look for fame and riches and find at the end of the day that the real treasure they have is each other. Said like that, it sounds like a real Hollywood movie, but what is great is the way Carlos re-interrupts that formula.”

But the film is also largely about sibling rivalry and jealousy; it’s Cain and Abel on a soccer field as two banana farming brothers get scouted on their local “football” field and suddenly find themselves in Mexico City playing against one another in the big leagues. The film could easily be seen as slightly autobiographical, a fictional account of the loving yet combative relationship that exists between the Cuarón brothers.

“Every brother is an ally and every brother is a rival,” del Toro muses. “I’ve known them for 22 years. All I’ve seen is them being great collaborators, [but] Alfonso will always be the older brother, no matter what. He’s a sort of mentor in that way.”

“The dynamic between brotherhood is completely universal,” García Bernal adds. “But, at the same time, anyone who has a brother, either a blood brother or a chosen brother or sister, would empathize with and recognize this dynamic.”

As part of Cuarón’s chosen brotherhood, both del Toro and García Bernal are quick to dismiss any mention of this being Carlos’ first movie.

“Carlos, in reality is a first-time filmmaker, but he understands films better than people who have done 10 films in a row,” García Bernal contends.

“We’re here as glorified bodyguards; the bouncers at the club. He’s the owner,” del Toro laughs.

Besides being Carlos’ official feature film debut, the film is the first to reunite García Bernal and Luna since Y tu mamá también, a highly anticipated repairing, though, del Toro says, it’s not the most appropriate casting.

He reveals, “These guys could not be further apart from these characters. … Diego playing Rudo is such a stretch because Diego’s so nice. He wants to be loved, and he wants to make everything easy. And Gael playing Cursi? Gael is really focused and determined. He’s not a child. They do a great job. They couldn’t be more different from Y tu mamá también and yet, the one thing that remains true is the incredible chemistry between the two of them.”