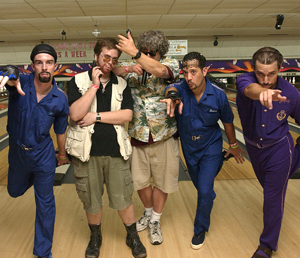 Achievers unite! Now is every The Big Lebowski fan’s time to shine.

Kicking off over a month before other cities begin celebrating all things Lebowski, Lebowski Fest Los Angeles is the annual chance to show your appreciation for the cult-followed Coen brothers film by dressing like your favorite character (ideally, “the Dude”), going bowling with Hispanic men in purple jumpsuits and drinking White Russians with women done up like the fat lady from a Nordic opera.

Born out of a boredom-killing movie-quoting session at a 2001 tattoo convention, the first Lebowski Fest took place in Louisville, Ky. and after an amply-attended inaugural weekend in the unlikely Southern city, others caught on and movie screenings coupled with costumed bowling nights have popped up from Las Vegas and London.

But since the movie’s plot centers around our fair city, Los Angeles Lebowski Fests are particularly epic. Jeff Bridges hung around at the first one in 2005, the people who inspired the characters showed up in 2007 (including Peter Exline ¬– his rug really tied the room together, what-have-you) and the actress who played the Ralphs check out girl always shows up in costume with her twin sister.

Because last year’s Lebowski love got skipped over, this year’s fest is more insane than ever. Thursday night’s movie party at the Wiltern includes a performance by an 8-year-old Japanese guitar prodigy (“Crazy Train” is his specialty.), appearances by nine obscure cast members (think Woo the rug-pisser and the kid that played Little Larry) and, of course, a Rocky Horror Picture Show-worthy screening of The Big Lebowski. Then, Friday’s bowling party (21+) takes over Cal Bowl with trivia contests, prizes for best costumes, high fives for those that traveled the farthest (Maine for the win!) and unlimited pin-knocking straight until last call.

Surround yourself with a weekend of live Lebowski reenactments and more red Maude wigs, German nihilists, East San Fernando Valley references and obsessed fans dressed up like ransom notes than one night can handle. It’s, like, Halloween without the October, man.