Another Sex In the City movie 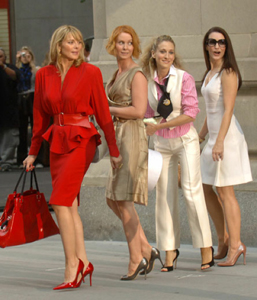 Get ready for Sex and the City 2.
(Credit: New Line Cinema)

All sequels and remakes today, folks. That’s just the state of things right now. Some are good ideas, some don’t make any sense at all, but if this is what the money people will write the checks for, what can you do? First up is something I’m actually excited about because it involves one of my favorite filmmakers.

Oliver Stone is returning to direct a sequel to his 1987 hit film Wall Street that starred Michael Douglas in the Oscar-winning role of Gordon Gekko. Who can forget that classic line, “Greed, for lack of a better word, is good. Greed works.” The film also starred Charlie Sheen and Martin Sheen playing father and son characters.

I think this is a very appropriate film to make given that the events and attitudes of the first film brought us to where we are right now. I understand that Shia LaBeouf (Transformers) will be playing a young Wall Street trader much like Sheen in the original and, of course, Douglas is returning as Gekko. This one is going to be awesome, just you wait.

Sex and the City 2

Surprised? Didn’t think so. When you make the kind of money the first film did you can bet your ass there’s going to be a sequel. All the usual suspects will be back, along with director Michael Patrick King.

Generally when something works it kicks off a big trend and everyone else clamors to follow. Considering that Sex and the City: The Movie made so much money and is getting a sequel, are other hit TV shows going to follow? Will a series get a film before it goes off the air, or is the new protocol to do a movie after the show goes off the air in order to extend the money-making past the show’s departure from TV?

One thing is for sure, the new rule of thumb in movie making is “if you do two, you have to do three.” Maybe Sex and the City 3 will tackle the subject of senior citizen dating.

Universal is developing a remake of Drop Dead Fred. Interestingly enough, I used to watch that film all the time when I was a little kid. The original starred Phoebe Cates (Gremlins) as a woman whose childhood imaginary friend, Fred, comes back when she’s grown up and wreaks havoc on her life.

I probably wouldn’t dig it now as much as I did when I was little because the film probably has more of an appeal to children, but from what I understand, Universal is going over the top with this one. From the press release they’ve compared their new version to Beetlejuice.

The project is apparently being developed for Russell Brand (Forgetting Sarah Marshall) to play the role of Fred, who was played by British actor Rik Mayall in the original. No director is attached yet, but Dennis McNicholas who wrote the upcoming Land of the Lost adaptation starring Will Ferrell, is writing the script.

What I find amusing about this is Hollywood is starting to remake films that came out in the ’90s. That’s sad.