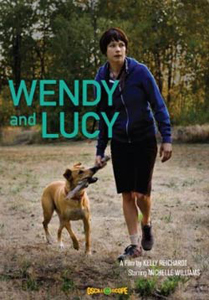 Dustin Hoffman and Emma Thompson star in Last Chance Harvey, a solid if unoriginal romance that is remarkable for the sole fact that it is intended for adults. It’s a pleasant film, with great London locations and two charming leads.

Wendy and Lucy is the latest from Old Joy director Kelly Reichardt. Michelle Williams stars as a poor young woman traveling across the country with her dog who gets stranded in a small town when her car breaks down. She has little money to fix her car, and her only companion has gone missing. It’s a micro-budget indie for fans of minimalist, verité-style films.

These inexpensive sets are a great way to beef up your collection, with four films in each, including: The Wild Bunch, Jeremiah Johnson, Rio Bravo, The Searchers, The Dirty Dozen, Singin’ in the Rain and Meet Me in St. Louis.

Stand up comedy is in dire straits. It seems that in a time of public figures like Sarah Palin and Rod Blagojevich who are walking parodies, the only kind of comedy that can keep up is improv-based, absurdist humor from the Frat Pack to “The Office.”

So Adam Ferrara’s new special, Funny as Hell, feels a bit like watching a one-man show version of a sitcom. There’s a few chuckles along the way, but his anecdotal, “I just broke up with my girlfriend and let me tell you about it” style is on the whole toothless and anachronistic.

Now that Wolverine’s in theaters, bone up on your X-Men mythology with the X-Men Trilogy now in hi-def. Each film comes in double-disc special editions and includes digital copies. Sure Brett Ratner’s third film was a bore, but Bryan Singer’s sharp entries make up for it. It’s a perfect, effects-filled series for Blu-ray.

John Howard Davies, producer of such British series as “Monty Python’s Flying Circus” and “Mr. Bean” co-created “The Fall and Rise of Reginald Perrin” with author David Nobbs (based on his novel). It’s a hilarious satire of the rat race, a portrait of a respectable company man at wits’ end. Originally premiering in 1976, all three seasons are collected here. They remain surprisingly fresh.

Hailing from the distant future of 2000 A.D., Gigantor the giant robot and his boy master, Jimmy Sparks finally arrive on DVD. One of the first animated shows imported from Japan, “Gigantor” premiered in the mid-’60s. This first volume contains 26 restored episodes, plus commentary tracks and the original comic books.

Winona Ryder, Ray Romano and the criminally underutilized Wes Bentley star in The Last Word, a little romantic comedy about a poet who writes suicide notes for the soon-to-be departed who gets romantically involved with a client’s sister.

Just Another Love Story is the ironically titled new film from Danish filmmaker Ole Bornedal, director of the cult favorite Nightwatch. Nominated for the Sundance Jury Prize, it’s like a darkly twisted take on the Sandra Bullock rom-com While You Were Sleeping. A disaffected crime scene photographer poses as an amnesiac’s boyfriend after he hit her with his car. When the actual boyfriend shows up and her memories return, things get dicey.