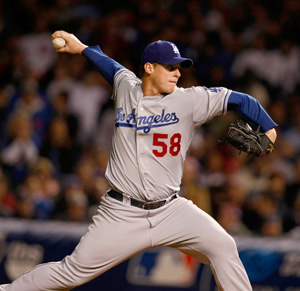 Ah, it’s good to be home. Home where the palm trees sway, where the gentle tones of the organ play out happy show tunes, where good will abides among friends and neighbors dressed in blue. Yes, it is good indeed to be home when your home is Dodger Stadium.

On a perfect afternoon last Sunday with clear skies and temps hovering in the low 70s, the Dodgers accomplished something they haven’t done in 126 years of franchise history by winning all of their first 10 games at home. No one can figure it out. On the road they are like any other mediocre team struggling to play .500 ball. Come home and they are angels of victory.

“You’re supposed to win at home,” said Dodger ace Chad Billingsley, who improved his record to 5-0 on Sunday.

It seems simple enough to the soft-spoken, 24-year old pitcher with the best record in the National League.

What makes Sunday’s victory particularly special is that it came on a day when four regular starters had the day off. Catcher Russell Martin, shortstop Rafael Furcal, third basemen Casey Blake and outfielder Manny Ramirez were substituted respectively by Brad Ausmus, Juan Castro, Mark Loretta and Juan Pierre, each of whom came up with big hits.

Manager Joe Torre noted after the game that the strength of veterans coming off the bench has been among the biggest additions to the team this year.

“We’re feeling pretty good about ourselves right now,” said Torre, as though it weren’t obvious.

The warmth emanating from the Dodger dugout can be felt in the upper decks. It’s all hugs and high fives whenever a player gets so much as a base hit.

Ramirez, sitting on the bench Sunday, was no less active as Dodger cheerleader. When catcher Brad Ausmus returned to the dugout after scoring, Ramirez very politely removed Ausmus’ batting helmet and placed it in his cubby for him. He then gave the veteran catcher a little back rub. Such gestures of good will are commonplace these days.

Joe Torre had this to say about the phenomena: “In my experience, chemistry comes from winning, rather than the other way around.”