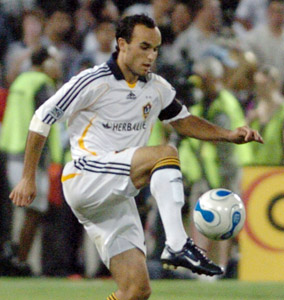 The Los Angeles Galaxy picked up their first victory of the season after beating the New York Red Bulls 1-0 at the Home Depot Center Saturday night.

“It was a tough result to digest,” Red Bulls head coach Juan Carlos Osorio said with a devastated face after the team dropped to 1-5-2.

Forward Landon Donovan scored a penalty kick in the 39th minute to lift the squad over the visitors. It was Donovan’s team leading fourth goal of the campaign.

“It is great to get the first win. I thought we were solid all over the field,” Donovan said.

The controversial instance came after Donovan attempted a service into the box, but the ball touched defender Seth Stammler’s hand. The linesman nearby made the obvious call and the rest was history, as the Galaxy improved to 1-1-4 with seven points.

“We are taking baby steps,” he said. “If I’m not mistaken, there were 19 players on our roster last year that aren’t here this year. We have a vision as to what we are trying to do and despite what anybody thinks, it does not happen overnight.”

Los Angeles now heads on a two-game road trip, starting today against Real Salt Lake at 6 p.m. in Utah. They then pay a visit to the Seattle Sounders FC Sunday at 12 p.m.